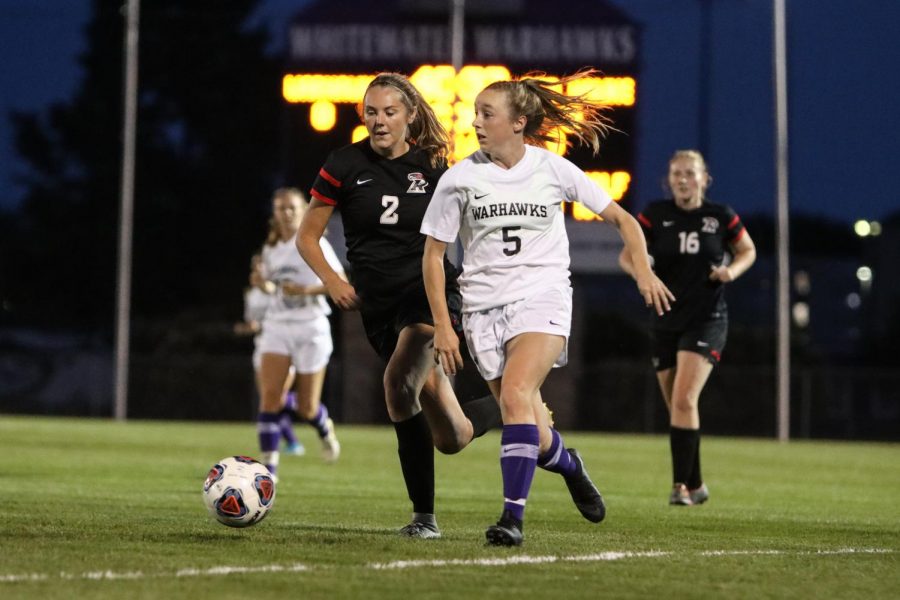 Member of the UW-Whitewater women’s soccer team Anna Boyd #5 goes for the ball during a match against Ripon, at Fiskum Field in Sept, 2019.

Senior Anna Boyd of the women’s soccer team was the selected recipient of the 2020 Wisconsin Intercollegiate Athletic Conference (WIAC) Judy Kruckman Women’s Soccer Scholar-Athlete Award. Boyd has over a 3.9 GPA for the academic year and described even being nominated for the award as “an honor.”

“I’m glad I’m able to honor my teammates, coaches and everyone that’s been a part of it, because it’s a prestigious award, and everyone else is part of the reason I won it as well,” said Boyd.

Last season, Boyd helped UW-Whitewater sweep the WIAC regular season and tournament championships with 29 points, and was also named to the Academic All-District® NCAA Division III Women’s Soccer First Team, as selected by the College Sports Information Directors of America, and the United Soccer Coaches Scholar All-North/Central Region Second Team. The team finished with a record of 14-6-3 and reached the NCAA Tournament.

Due to the Covid-19 pandemic, the season which was scheduled for fall, has been canceled entirely. The girls team has been able to practice for the past few months, but nothing has been announced yet by the WIAC in terms of planning to make it up. The best case scenario that the team was given is that there could potentially be a ten game season in the spring that wouldn’t really count towards anything, but just to make up for the season being called off.

The preparation has been very different than a typical season as you can probably envision. The team wasn’t able to move in until all students did during the first week of September, and once they arrived, it didn’t get any easier due to the pandemic. Boyd said, “for the first two weeks we all had to quarantine and had to turn in two or three negative results before we could even practice. We also had to split into small groups and do individual workouts with the same five or six people for about a month.” They’ve progressed into doing team scrimmages, but practice is all the team can do for the time being.

Boyd plans to graduate in the spring, and then is planning on student teaching in the fall of 2021. Due to the cancellation of numerous sport seasons, the NCAA has granted everyone across all sports one more year of eligibility. Originally, Boyd was planning on student teaching near her hometown of De Pere. However, since she’s been granted another year of eligibility, she plans to student-teach in the Whitewater area so she can play one final season.

After college and her final season, Boyd plans to continue to pursue soccer on top of whatever avenue she chooses in her education path, but one thing she certainly wants to do is coach.

“I want to be a coach in whatever school district I work in,” Boyd said. “I’ve done volunteer work in the past and I plan to pursue that route in the future at some point.”

Boyd ranks in the top 10 on the school career chart in points, goals and assists.