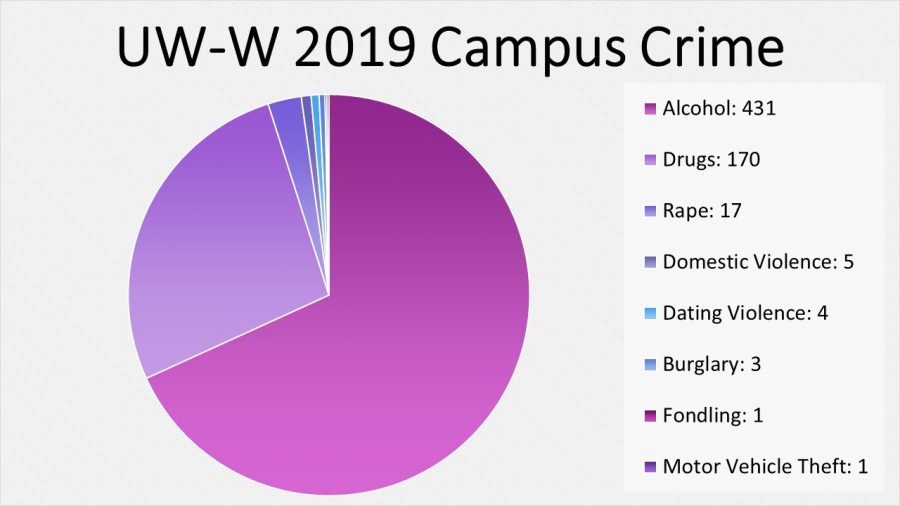 In 2019 the university recorded 636 on-campus offenses, almost half of which occurred in residence halls with 397 offenses committed in them. Drugs and alcohol were overwhelmingly the main reason for these, both in the residence halls and on-campus in general. A total of 431 alcohol offenses were referred to a correctional source. Of the 170 drug offenses, 111 arrests were made while 59 were referred to a correctional source.

There were also a total of  17 rapes reported, five cases of domestic violence, four cases of dating violence, three burglaries, one case of fondling, and one motor vehicle theft. There were no offenses recorded for the UW-Whitewater at Rock County campus.

“When crime does occur, we provide skilled investigation, compassionate assistance and a desire to help heal the mental, emotional and physical concerns of victims. We encourage reporting of all criminal incidents regardless of their perceived magnitude as you never know when you can be the key to unlocking a larger mystery,” said Chief of Police Matt Kiederlen in the report.

The Annual Security and Fire Safety Report was made available to the public in Dec. 2020. The 70-page report contains information on crime prevention, university police law enforcement authority, crime statistics from the last three years, and more related to the campus and crime. The report also provides resources for individuals seeking health services, and safety and security resources, as well as sexual assault, domestic violence, dating violence and stalking survivor resources.

To learn more and to read the full Annual Security and Fire Safety Report visit https://www.uww.edu/Documents/adminaffairs/police/asfr.pdf.

The UW-Whitewater campus police ended the 2020 year with just a few more reported crimes throughout the month of December. A total of 19 crimes were reported and a majority of them were cleared either by arrest, referring to other police departments or to marijuana diversion programs.

The most prevalent type of crime committed in December dealt with drugs, showing half of the total crimes actually being somehow drug-related. Two out of the three traffic violations included drugs in the report and the other with operating while intoxicated.

The police department had a few days where no incidents were reported at all. Apart from some scattered days, there were also no incidents for the last two weeks of the month leading into the New Year. From Dec. 21 to Jan. 3 no new crimes were reported on campus.

For more information about the UW-Whitewater Police Department visit https://www.uww.edu/adminaffairs/police.