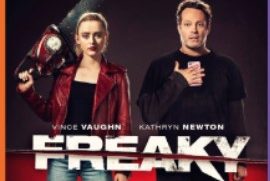 The movie poster for Freaky

The University Center (UC) kicks off the spring semester showing of movies with the 2020 horror thriller movie Freaky. A film that features the likes of Vince Vaughn, Kathryn Newton and Celeste O’Connor. While Freaky is dubbed a horror movie, it has many elements that make the movie so much more than that of a typical slasher film.

The plot of the movie tells the story of Millie, a bullied high school girl who is only trying to figure herself out after her father’s death. However, as homecoming rolls around so does “The Butcher”, an urban legend who turns out to be a real life serial killer. On a foggy night after a long couple hours of being the football team’s mascot, Millie gets targeted by The Butcher. After a short chase, The Butcher stabs Millie with a magical ancient knife. Although, instead of Millie dying, her and The Butcher end up switching bodies. Millie and her friends must now locate the serial killer before their bodies are switched permanently.

Freaky waste no time getting into the action. The opening scene alone features four deaths and the introduction of the famed serial killer. Throughout the movie, many more deaths are to come. With this being said, the movie was never too scary. Most of the deaths are focused on gore, but not fear itself. Overall, the movie should be labeled just as much of a comedy film as it is a horror film. The movie has many jokes sprinkled into the plot that make it worth the watch. Jokes were centered around a teenage girl being in a grown man’s body and the typical life of a high school girl. I found myself laughing more often than actually being scared.

It’s also worth noting Freaky goes beyond a typical horror movie plot. While some characters are based on stereotypical high school students, others like Millie and her family deal with the tragedy of losing their father. Overall, while Freaky may not be too scary, it’s definitely worth watching. It has a fair balance of comedy, adventure and elements of a classic horror movie.

If students are looking for something to do, they can head to Summers Auditorium to watch movies throughout the spring semester. More information on events can be found on the UC website.