Warhawks are back in the game 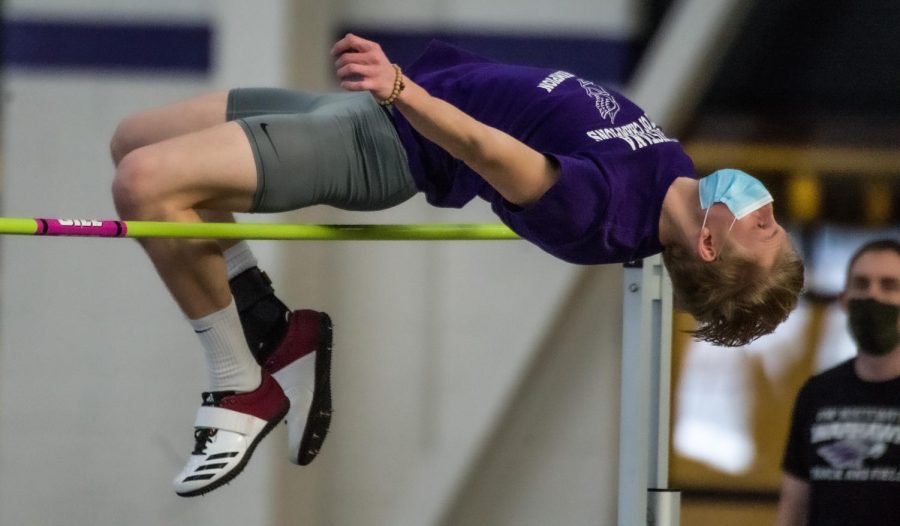 Quinn Halversen competes in the high jump during an intrasquad track & field meet inside the Kachel Fieldhouse on Saturday Jan. 23.

Sports are back at UW-Whitewater for the 2021 spring semester. Those sports competing in the winter season include indoor track & field, basketball, wrestling, gymnastics and swimming & diving.
Coaches and players are beyond excited that they officially will be back in competition starting in February to finally have a season.
On the track is one particularly thrilled coach, Michael Johnson, who is entering his 12th season as head coach of the men’s track and field team, and 10th as head coach of the women’s team. Johnson continues to be incredibly proud of his athletes because none of their mindsets changed while preparing for this moment. Johnson whole-heartedly knows there is great opportunity for the teams to thrive.
“Some coaches I have talked to have said, ‘oh this is going to be a rebuilding year this season for us.’ To me there is opportunity for the taking and we have continued to emphasize in having a great attitude about that,” said Johnson.

Coach Johnson also feels the teams have some other advantages as well.
“Normally when we come back from break the kids have to jump right back in the routine immediately, but now we will have a few weeks which will help everyone get in the swing of things. Also I think we have embraced the opportunity we have in front of us and that is what good athletes and teams focus on, and facing some adversity will help us,” Johnson said.
Now on the court, a team coming off a very impressive season last year is the women’s basketball team led by head coach Keri Carollo. She is entering her 19th season as head coach.
“We are always striving to finish at the top of the conference. We want to win the conference tournament, especially since we can only compete against half of the conference, and a win in the conference tournament gives an automatic bid to the NCAA Tournament,” said Carollo. “Our experience will be key. We have a lot coming back from last season. Our team chemistry is second to none. The team works extremely hard and are really dedicated.”
Also returning is sophomore forward Aleah Grundahl, who was the WIAC Newcomer of the Year last season, and plans to be a big part of the team.
“This year our coaches have put our hearts in the fact that we have a really deep bench and we only lost two seniors, so it is just about implementing the new freshmen into game-like situations. This year we actually switched to more of a tighter defense so we will be in the gaps more, which should help us get a lot more steals this season,” Grundahl said.
On the mats, the wrestling team is ready for the challenge of the season ahead. Dylan Uzumecki, a junior who last season was the WIAC runner-up at his weight and second team All-WIAC, will be one of the older wrestlers ready to lead by example.
“This team is definitely different. We have trained for so long without being able to compete, for four full months, and it takes a lot to stick that out – especially with the team being very young this season. We are ready for competition and we train harder than anyone,” said Uzumecki.