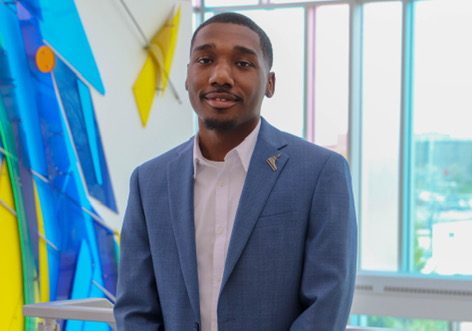 Ricky Newell is a first-generation college graduate. He graduated in the spring of 2019 with his BBA in accounting and finished his MBA with an IT management emphasis the following year. He didn’t originally plan on getting his master’s, but sees it as a huge accomplishment. Since graduation, he has completed his CPA exam and is currently employed as an auditor at PricewaterhouseCoopers (PwC) in Milwaukee, one of the four largest professional service firms globally.

Newell was initially drawn to UW-Whitewater because of its reputation as a good business school and the College of Business & Economics lived up to its reputation. Thanks to UW-Whitewater, Newell gathered the resources necessary to be successful in the field of accounting. It wasn’t just the great courses offered, but his involvement outside the classroom as well.

“The College of Business & Economics just does a great job preparing students for life after school,” said Newell. “The professors are great, there’s a lot of connections to employers and the opportunities are endless.”

Newell participated in extracurriculars on campus that helped prepare him for his current position. He had leadership positions in the National Association of Black Accountants, the Black Student Union and the Homecoming Steering Committee. He was also a member of Beta Alpha Psi, a professional accounting organization.

“My experiences from each of those equipped me with skills that are useful in my daily life now,” said Newell.

The extracurricular activities allowed him to gain even more experience during his time at UW-W and allowed him to network with other people in his field.

While attending UW-W he worked closely with Cela Castillo, who graduated from UW-W in December 2019.

“He is very dedicated, hardworking, and supportive,” said Castillo. “He is a mentor to many people, and always willing to help. Overall, you can tell that he is going to make sure that, as he climbs the ladder of success, he is bringing people along with him. He cares for his community and wants to see people succeed.”

Newell talks about Han Ngo, as being one of the most supportive people he met while on campus. Ngo was Newell’s advisor, but the two also had ties through other on-campus organizations, such as the Summer Business Institute. Ngo helped Newell get the position he’s in today. She also speaks positively about him, calling him “one of her best students.”

“Ricky is dependable, compassionate, has strong leadership skills and is academically motivated. He’s committed to helping others who face challenges similar to him, and is an individual who takes every opportunity to succeed,” Ngo said. “He is a hard worker, very knowledgeable in what he does and has good work ethic.”

Although Newell did well in school and gained plenty of knowledge, the world of work took him by surprise. After graduation, Newell faced the challenge of finding a company that allowed him to be himself while learning how to apply his knowledge in his specific role at PwC.

“I think the big challenge most minorities face, which I can relate to, is bringing your true self to work and not assimilating,” Newell said. “I think the firm I work at does a great job and promotes an environment that allows everyone to be themselves and be comfortable doing so.”

Newell’s has important advise to pass along to his fellow Warhawks.

“It’s cliché, but network with people on campus and build genuine relationships,” said Newell. “Take advantage of all opportunities that are available for students.”