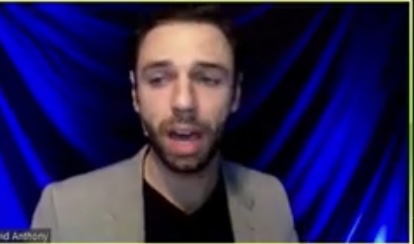 Hypnotist David Anthony put the campus in a trance Thursday, Feb. 4 as the 4th event of the University Center’s Warhawk Winterfest.

At first thought, most people would assume there’s no way they would ever get hypnotized. However, I am sure Anthony could change their mind. Once he began the process of hypnosis most audience members were visibly sleepy. I too became a little dreary and heavy headed listening to Anthony, although, the key to hypnosis is letting yourself fall vulnerable to the hypnotist. In a way, it’s believing that if you listen to the hypnotist, you will be hypnotized.

As the show went along it became clear Anthony hypnotized several audience members. Anthony would give them simple tasks such as, playing in a rock band or pretending you’re on a rollercoaster. I was really surprised when a couple of audience members began frantically flailing their arms in the air as if the roller coaster they were on started accelerating down a big hill. Each time Anthony would give a new command, the hypnotized audience members would cave into his wishes. It is truly a sight to see. Who new hypnosis could go digital?!

Along with the hypnosis, Anthony gave a couple jokes to keep the mood happy and moving along. The jokes seemed genuine and not as if he tried too hard to make them or force a response. Adding in comedy gives his shows a different aspect that most people don’t expect heading into an intense show like hypnosis.

Overall, the performance did not seem too cookie cutter. Anthony talked to the audience and got to know them. The show was performed through Zoom, so he and the audience were able to interact. This allowed the audience to feel more involved and gave the show a personal feel. Anthony even referred to the audience members by their name and encouraged them to turn on their cameras so they could talk. Subtle elements like this really make the show worth attending. It’s especially impressive to do through a screen. I commend Anthony for being able to adapt during these times, and to do it so successfully.