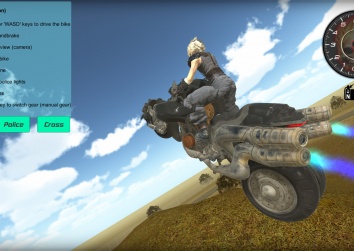 “You awaken in a virtual world, with no memories but that of your friend. Somehow you know they’re in the same situation as you. Send them photos with your patented 思-brand camera to help them remember who they are.”

These are the rules for playing ＬＯＳＴ ＮＯＳＴＡＬＧＩＡ – 失われちゃった郷愁 , one of 10 video games created by the UW-Whitewater team for this year’s Global Game Jam. The competition is held every January for participants all around the world who don’t play video games – they actually create them. This year’s theme for the online event is “Lost and Found” and the games are now ready for you to explore.

“It’s about creating never before seen games and creating an environment of cooperation, which hopefully leads to the creation of new friendships,” says Communication assistant professor Nick Hwang, a lead coordinator for UW-Whitewater in the event. “The main point of the Global Game Jam isn’t competition, but more or so encouraging a sense of comradery and collaboration among the contestants.”

Although the event went all-virtual this year, participation among Whitewater students was still relatively large with 31 students, according to Hwang. Some didn’t have a degree related to video games, but joined for the fun of it.

In the end, the Whitewater students and staff designed 10 video games, sharing their work through social media outlets like Discord, and ultimately working as a team throughout the entire event just as the Global Game Jam is intended.

The main group behind UW-Whitewater’s involvement is the Game and Media Entertainment Developers club, or GAMED for short. The club aims to give members an environment that promotes skills for making games and interactive media, as well as providing practice through events like the Global Game Jam and other club-run jams. Several members and supporting staff are in the Media Arts and Gaming major in the Communication Department. So it’s no surprise that GAMED led the charge at the Global Game Jam.

Member Leah Blacysk worked on a video game called “Doggo Rescue” for the competition. The game is a 3D point and click game where the player controls a dog searching for people lost in the surrounding area.

“This is my third year participating in the Global Game Jam,” says Blacysk. “I am a programmer, and I worked on the functionality of the player movement and the AI of the human companion.”

“Doggo Rescue” and the other nine video games created by UW-Whitewater students can be found on the Global Game Jam website https://globalgamejam.org/2021/jam-sites/uw-whitewater-virtual-jam/games.

“One of the unique things about an event like the Global Game Jam is you gain some experience on time management and working under pressure since you have a 48-hour time period to start making a game from scratch, and it can be really fun to do,” says GAMED president Wesley McWhorter. “We also meet remotely and work on team projects throughout the semester, whenever we have the free time.”

For those interested in participating in any of the other game jams being held this semester by GAMED, the club meets every Monday at 7 p.m. on their discord server https://discord.gg/ubUFFYA.

The Global Game Jam ultimately challenged Whitewater students in ways beyond the technological. The team created, cooperated, and worked under pressure, but most importantly had fun doing it.