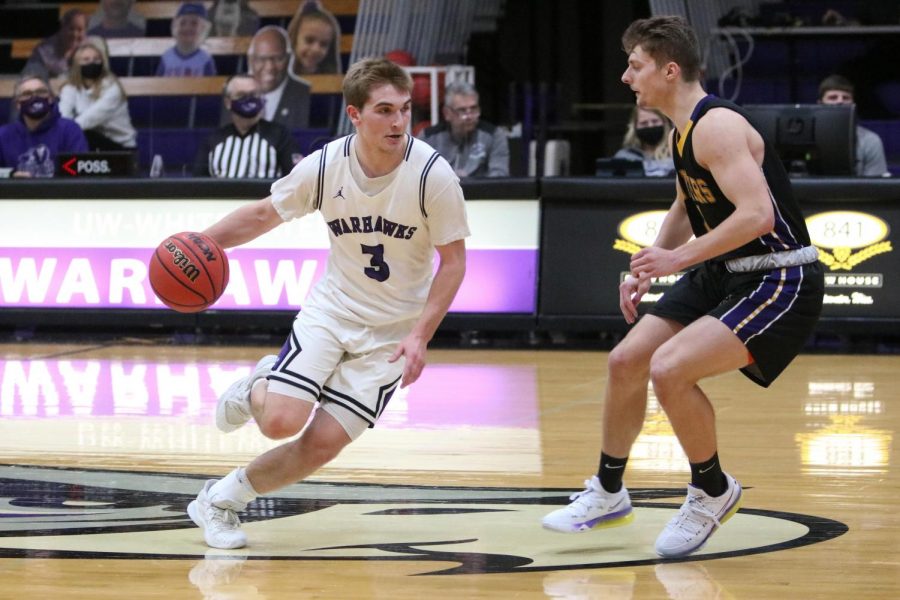 The UW-W men’s basketball team lost a fist-wrenching game to Stevens Point Wednesday, Feb. 4 at the Kachel Gymnasium by a close 68-70 final score.

The game was a back and forth affair in the first half with six lead changes. Both teams also struggled to shoot the ball from behind the arc, until midway through the first half. With the physicality and fast pace of the first half, Whitewater was able to hold onto a 30-29 lead at the break. Newcomer point guard Gage Malensek, led the way with 10 points, 2 steals and 2 assists.

In the second half, the Pointers were able to get off to another quick start with a 15-6 run, gaining a lead against the Warhawks. The Pointers were reliant all night on junior forward Philip Flory’s big game while he stayed hot throughout the entire competition finishing with 26 points, 6 rebounds and 4 assists. Pointers head coach Bob Semling gave some insight on Flory’s impressive performance.

“We expect that out of Philip. I’m sure a lot of people that saw him play in the WIAC for the first time were really impressed. We expect him to be able to do that. We have been watching Philip for years since he was an 8th grader growing up in Wisconsin Rapids. We know he is capable of being a really tough matchup and that he can take over games, and how he can score in bunches and score in many different ways,” said Semling.

But the Warhawks would stay aggressive and didn’t give up, storming back into the game to tie it back up with 8:22 remaining in the match after being down double digits. Junior forward, Breontae Hunt was able to give loads of energy on the defensive end and off the glass for the team. Sophomore forward Trevon Chislom took over for a while in the second half giving great looks at the rim and providing 14 points in the game.

The competition remained back and forth toward the final minutes, similar to the first, half though the Pointers were maintaining a small lead of five into the closing seconds. Then sophomore guard, Brian Conaghan fired up a three-pointer to cut the lead down to two with 37 seconds remaining.

“It was a big shot, but in the moment I wasn’t really worried about the significance of the shot. I was more upset we were still down. Looking back at it though it was a big shot to definitely keep us in the game,” said Conaghan.

Whitewater continued to play some tough defense in those closing seconds and were able to get the ball back with two seconds remaining while down by just two points. The Warhawks set up a great look at the three from Chislom to win the game, but his shot did not sail in.

Some controversy ensued because while Chislom shot the attempt, the clock never started from the two seconds remaining. The referees, however, called the game because most likely the two seconds would have run off during the pass to Chislom and his attempt from the three-point-line. The result ended a tough fight for a two-point loss to Stevens Point, with Malensek leading the Warhawks with 22 points, 5 assists and 2 steals.

Head coach Pat Miller still saw some great takeaways from their first game of the season.

“I thought we did some things well, there were some areas in the game where our inexperience definitely showed, but overall a lot of positive things to take from. Also it’s always good to play some outside competition in order to really evaluate where we are at, what we need to do and adjustments that we need to make,” said Miller.

The Warhawks will continue the with an only conference schedule this season that runs through the end of February. Next in the contest is an away game at Oshkosh Feb. 10 at 7 p.m.