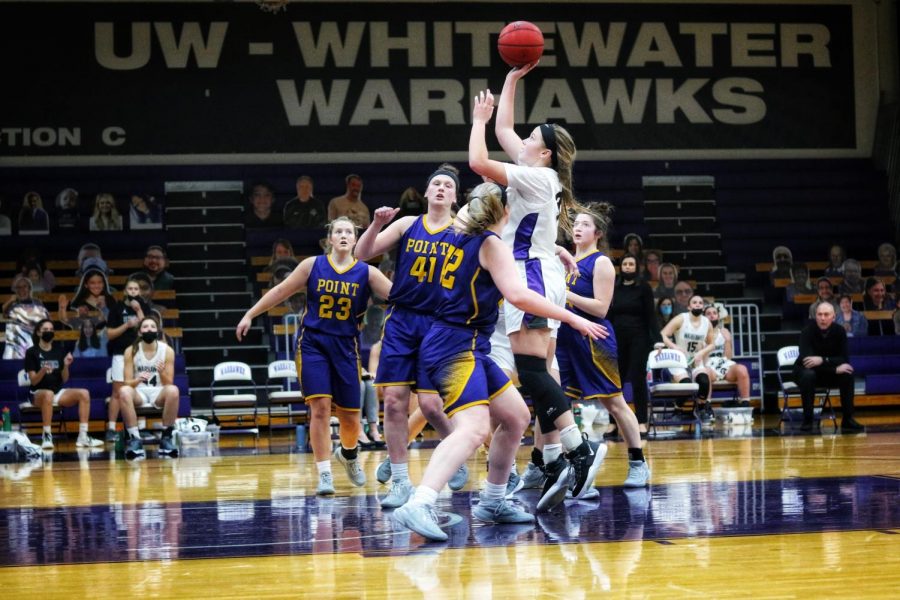 Sophomore forward Aleah Grundahl (33) jumps up to go for a basket during UW-Whitewater’s game against UW-Stevens Point. Grundahl (33) finished the game with a team high 16 points.

The Warhawk women’s basketball team trounced the Pointers in both games last week, starting the season on a 2-0 high despite an announcement that the NCAA canceled DIII winter championships due to low participation. The women worked together to win at Stevens Point Wednesday, Feb. 3 with a score of 61 – 50 and then again at the home opener 64 – 50 Friday, Feb. 5.

The Warhawks started out strong at Friday’s home match until for a split second they were down a few points in the second quarter. By the end of the third quarter going into the fourth the Warhawks caught the Pointers off guard with their free throws, offense, defense, three-pointers and layups. The succession of baskets helped the team retake the lead before the finish.

“I would have liked to have started out a little bit faster on the offensive end and scored some early easy baskets, but I was really proud of our team for hanging in there and playing great defense that allowed us to stay in the game,” said UW-W head coach Keri Carollo.

Near the 1:40 mark of the first quarter both teams were tied 6-6, but then shortly after that the Warhawks stole the ball six times, which gave them the upper hand. With only 0:40 left on the clock, Rebekah Schumacher snuck in and pulled a good lay up giving the Warhawks more points, outscoring the Pointers 11-9.

“We knew when they were going to double down that our guards would pick us back up hitting the three so we were just ready for the pressure. Early on we struggled with that, but we got through the flow and went with it,” said sophomore forward Aleah Grundhal.

However, going into the third quarter the Warhawks started to pick it up with a total of 12 rebounds. They started to get to the line more and raised their three-point percentage by 9.6 percent, taking back the upper hand. Aleah Grundhal took over, scoring buckets for the Warhawks during this quarter and outscoring the Pointers 19-9.

“I just think it was our execution out on the floor to be able to give us some separation, said UW-SP head coach Shirley Egner. “Whitewater is a very good team. They fought back, came out and applied more pressure in the third quarter, turned us over and they were able to gain a lead and sustain it.”

The Warhawks started strong, lost some rhythm around the half, but came back for the win in the end. Major points put up by Aleah Grundhal scoring 16, Johanna Taylor scoring 14 points, and Maggie Trautsch scoring a total of nine points pushed the Warhawks to beat the Pointers by a total of 14 points at the finish.