Warhawks thrive on mats, in water 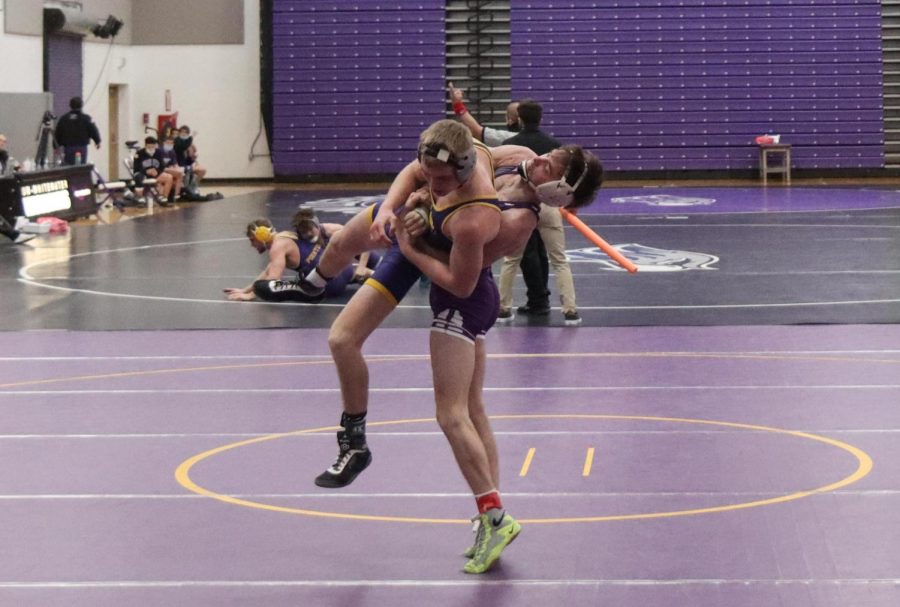 The UW-Whitewater wrestling team won in its first match of the 2021 season against UW-Stevens Point Feb. 5.

The wrestling team continued its season this week with important matches against UW Eau Claire, La Crosse and Platteville. The Warhawks gave a dominant performance Feb. 9 in Whitewater defeating the Eau Claire Blugolds 23-12. The victory moved the team to 2-0 and gave the team confidence after defeating the 14th ranked team in Division III. Junior Jaritt Shinhoster won his match at the 174 pound weight class, ranking fifth in the nation.

“My personal model to get rid of stress or anything is to focus on that first take down. Then once I get that first take down, for me everything comes easy,” said Shinhoster. “Team-wise a quick start like this big for us especially having such a young team. Everyone is putting in work and it is great to see.”

The wrestling team continued competition Feb. 12 against WIAC duals fifth ranked UW-Lacrosse and UW-Platteville. Whitewater struggled against the Eagles, falling 4-40, but then redeemed themselves with an impressive win 37-6 over the Pioneers. The wrestling team is now 3-1 on the season and faces off at home against UW-Oshkosh Friday, Feb. 19.

For the men’s and women’s swimming and diving team members, it was great to compete in the pool again away against UW-Stevens Point. There were no team scores kept, but there were some major individual successes.

Senior Anna Yeazel left it all in the water Saturday, Feb. 13, continuing her strong start to the season with another win in the 100-yard breaststroke.

“My goal going into this meet was to beat my time from last week. It’s pretty cool to win my first two college events this season two weekends in a row. It felt really good and it finally feels like my hard work is paying off,” said Yeazel.

The men’s team showed some success as well with no first place wins individually, but many second place finishes across the board. Freshman Hunter Hayberger had two runner-up finishes in the 200 and 500-yard freestyle. Senior Tyler Chatterton finished second in the 200-yard freestyle relay team.

“I think in general we have to continue to have a strong mindset since the season has been so hard and different. We have to stay strong both mentally and physically with only a few weeks remaining,” said Chatterton.

The UW-W swim and dive teams will look to build off their trip to the Pointers when they host UW-Oshkosh next week at home Saturday, Feb. 20.