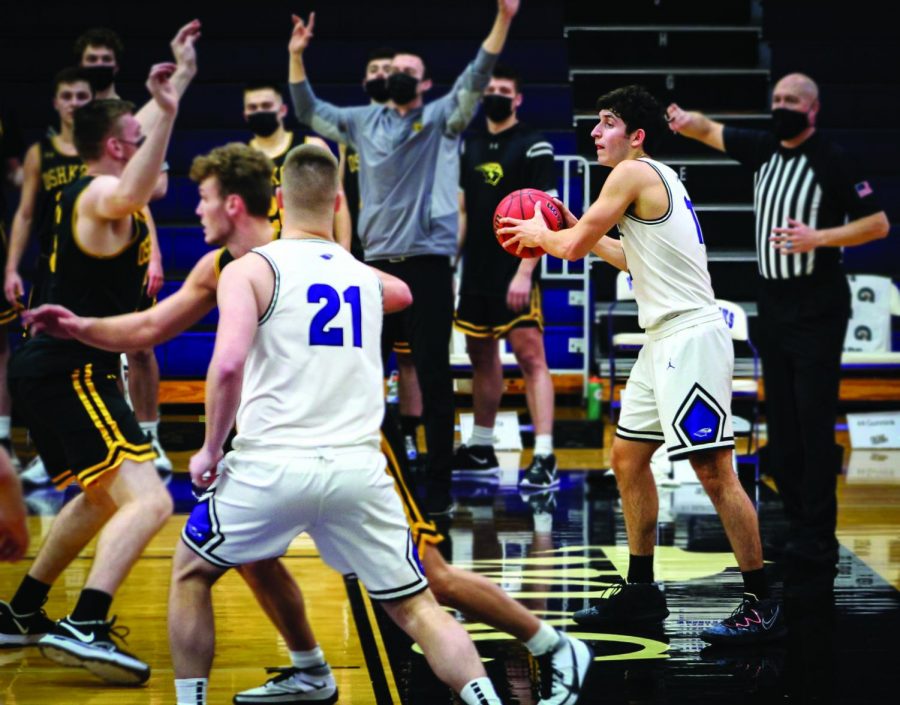 Sophomore guard Will Pytleski (21) turns back around to face freshman guard John Itounas (12), who’s looking for an open teammate to pass the basketball to on Friday, Feb. 12 at the UW-Whitewater men’s basketball game.

Both UW-Whitewater men’s and women’s basketball teams suffered tough defeats from UW-Oshkosh this past week. The athletes now prepare for face-offs against UW-Platteville in the days ahead.

The men (1-2 overall, 1-2 WIAC) chased the Titans throughout the entire WIAC conference contest Friday, Feb. 12, but couldn’t pull off a win at Kachel Gymnasium. The third game had been cancelled due to potential COVID-19 exposure on the Titans team. Cleared to proceed, Oshkosh started the game by jumping in the lead with a score of 14-2 in just the first five minutes.

“There is a tremendous amount we need to work on for future games, but they are a good group and work well,” said head coach Patrick Miller. “We just need to continue to get better.”

The Warhawks fought hard, but were held to just 30 percent in shooting. At the halftime they were still down by 13 points with a 20-33 score.

“Whitewater was able to get several offensive rebounds in the first half and we spoke about that at halftime. We knew we had to do a better job on the glass in the second half,” said Oshkosh head coach Matthew Lewis.

The women’s team (2-2 overall, 2-2 WIAC) took a tough loss as well, finishing their Feb. 12 game 51-69 after the Titans took over the court in Oshkosh. The team mounted a comeback to draw within two possessions early in the fourth quarter, but was unable to sustain the momentum.

The Warhawks closed in during the third quarter with a 6-0 run, but were still unable to catch up.

The women’s team heads to Platteville for a Feb. 17 tipoff at 7 p.m. and the men’s team will faceoff against the Pioneers at the same time in Whitewater at the Kachel Gymnasium.