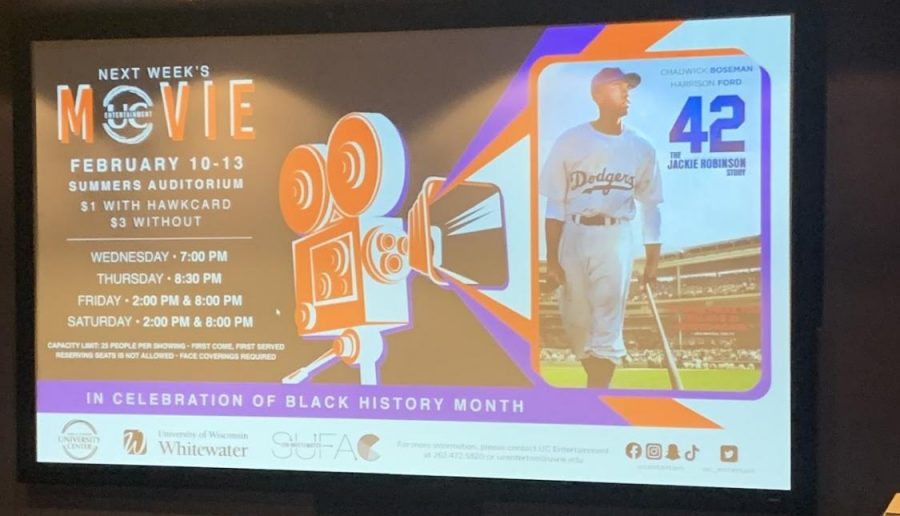 But enough about what the auditorium is doing, let’s talk about the movie, which  is definitely worth checking out if you get the chance.

“42” is a biographical sports film that focuses on Jackie Robinson and the challenges that came along with being the first ever African American Major League Baseball player in 1946. In the movie, Jackie Robinson is played by the late Chadwick Boseman, who does a great job of playing the athlete. The supporting cast also does well in their respective roles, including Harrison Ford as Branch Rickey, Nicolle Beharie as Rachel Robinson and Lewis Black as Pee Wee Reese.

The movie of course, like many films focusing on historical Black figures, focuses on the negativity and racism that is thrown at Jackie Robinson. He is constantly told that he can’t even yell back at those hurling racial slurs at him, due to how society viewed it at the time. And so, the movie forces the watcher to go through multiple unpleasant scenes of racist acts by those not happy with Jackie Robinson’s entry into Major League Baseball, and for a movie like this, that’s how it should be. The careers of African American sports players during that time was never black and white.  People like Jackie Robinson had to deal with some pretty horrible stuff while just trying to play the sport they loved, and the movie captures this perfectly. It makes you root for Jackie Robinson to prove all the naysayers wrong, and if you know anything about the real life of Jackie Robinson, you’d know he very much did.

Ultimately, I very much enjoyed watching “42.” It was a well made film with plenty of talent and charisma being displayed by its actors. While “42” is a movie about baseball, it’s also a movie about the challenges and accomplishments of a man trying to play for the love of the game. It’s about a man who shows true courage and admirable restraint by not responding in kind to those who only want to see him fail because of the color of his skin. Ultimately, it’s about a man letting his talent silence the critics and make history while doing so.

So if you’re looking for a good movie to watch for Black History Month, or just looking for something to sit down and watch in your free time, perhaps none would fit better than the movie called “42.”