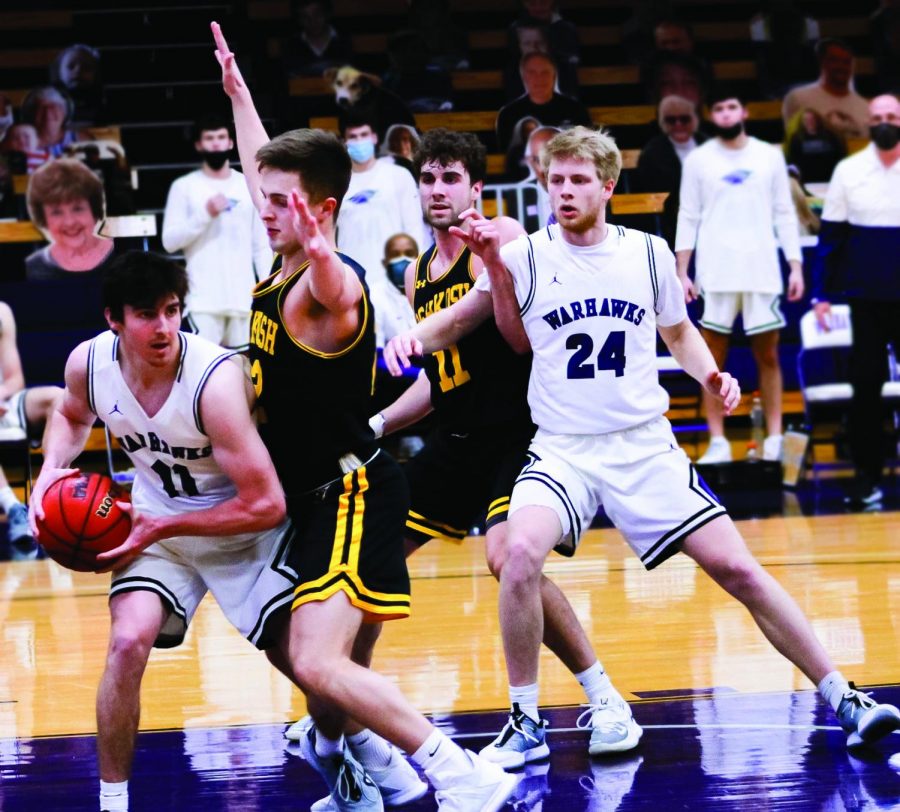 The UW-W men’s basketball team fought hard, but lost another tough game to 11th nationally ranked UW-Platteville, Friday night 58 to 64 in Platteville on Bo Ryan Court. The game was a slugfest in the first half as Whitewater struggled from the field only shooting about 27 percent, leaving them trailing the Pioneers by eight at the break.

The roles somewhat reversed in the second half, as the Warhawks shot the ball a lot better while the Pioneers struggled to find the hole in the basket. Whitewater even had the lead at multiple times during the second half. The strong show was led through great energy with the help of 18 points off the bench by Trevon Chislom and 13 points by Breontae Hunt.

Whitewater battled throughout, but Platteville played clutch in the end and the Warhawks came up short again falling to 1-4 on the season. Despite another loss, Whitewater’s head coach Pat Miller was really proud of his team and thinks there is something to really build off of for the rest of the season.

“I thought tonight was our best effort of the year in terms of execution, energy and even down the stretch we had good opportunities. We got good looks and good shots. We just couldn’t hit them,” said Miller.

UW-Platteville continues their strong start to the season as they improve to 5-1 after winning two games over the Warhawks this past week. Head coach Jeff Gard was thrilled with the win the Pioneers were able to come away with and gave credit to the effort Whitewater brought to them.

“I think it’s great to get a W in this league especially. And with everything going on, you’re happy to pull it out. I was pleased with our guys especially the way they stuck together, as Whitewater came out with extreme effort right away,” said Gard.

The Warhawks have the next two games against UW-Stout to continue their schedule against only conference teams. Newcomer point guard, Gage Malensek, provided some insight on how individually he can improve, and overall how the team can turn things around.

“I mean individually I had a lot of turnovers, which escalated to the team and turnovers is definitely a thing we need to fix. As well as getting to the free throw line and making those shots to finish strong,” said Malensek.

The Warhawks meet Stout at home Feb. 24 and again in Menomonie Feb. 26.