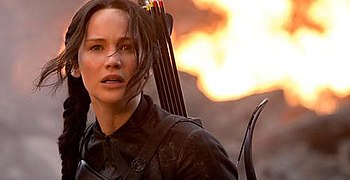 Forget the sayings “throw like a girl” and “hit like a girl” because in 2021, those words are out of here. It’s all about girl power this month celebrating Women’s History Month, so let’s look at the top trending female moments in movies. Let me just say, if you haven’t seen any of The Hunger Games, The Devil Wears Prada, or Avengers: Endgame, then I advise you to watch them before you continue to read ’cause spoilers are ahead.

Right off the bat, let’s talk about the iconic movie stemming from the trilogy written by Suzanne Collins, The Hunger Games. The lead character is our heroine Katniss Everdeen, who not only tricks the entire system that is The Hunger Games in its entirety, but also does this on three separate occasions. The first scene that really speaks about her character is when she sacrifices herself in place of her younger sister in the games. This scene really goes to show the compassion and deep love Katniss possesses for her little sister.

The next scene being at the end of the first movie when it’s only her and Peeta. She out tricks the entire system in this scene when she takes out poisonous berries she found prior in the games. As her and Peeta are about to consume the berries together and result in no one ending the games, there is a voice of the game master that tells them to stop. It was clear that Katniss outsmarted the game master as her and Peta were the first ever to win the games together (not just resulting in one victor). What a woman.

The final scene that puts everything together is the ending of Mockingjay: Part 2. In the end of the movie, absolute madness and destruction was brought to many districts as Katniss became the staple for a revolution upon the districts and capital. This caused an uproar of a new district, District 13, to take over the capital and conduct their own version of the games but with children of the capital. Katniss knew this would only cause the cycle to repeat itself, and she struck not President Snow with her arrow, but the leader of District 13 during what was supposed to be Snow’s execution. This final moment resonates just how powerful, intelligent, and all around a fantastic character and woman that is Katniss Everdeen.

Next up we have Meryl Streep’s character in The Devil Wears Prada, which throughout most of the movie you find a love yet hatred for her. But we’re talking about the moment when Andy (Anne Hathaway’s character) gets her job at the fashion company and during a photo shoot, calls the fashion items ‘stuff.’

“Meryl Streep goes off on her with all this information about the fashion industry and sticks it to Anne. It’s so powerful,” said 22 year-old Emma Evans regarding the scene.

I think we can all agree that Streep really told Hathaway her place in this scene and revealed that what one person may view as ‘stuff’ is something so much more to others. Pop off queen.

Finally, this scene at first I thought was a tad cliché to add in Avengers: Endgame, but re-watching the movie again and again just made this scene in question so admirable and powerful. This scene is during the final battle between Thanos’ army and The Avengers trying to stop Thanos from vanishing all the heroes once again. In this particular part of the battle, all the heroines seen in other parts of the Avengers (Scarlet Witch, Mantis, Pepper Potts, etc.) help guide Captain Marvel through Thanos’ army with the Infinity Stone Gauntlet. When Spider-Man tells Captain Marvel “I don’t know how you’re gonna get through those guys” when handing off the gauntlet, and the heroines come out and reassure her that they all have her back, it’s just so good to describe in words. It just allows young girls to look up to superheroes who are like them and look like them. I think it represents what female power is really all about.

With a plethora of movies and many talented actresses who convey our favorite heroines and role models, it’s safe to say that these women are trending this month with their heads held high. Happy Women History Month, you go girl.