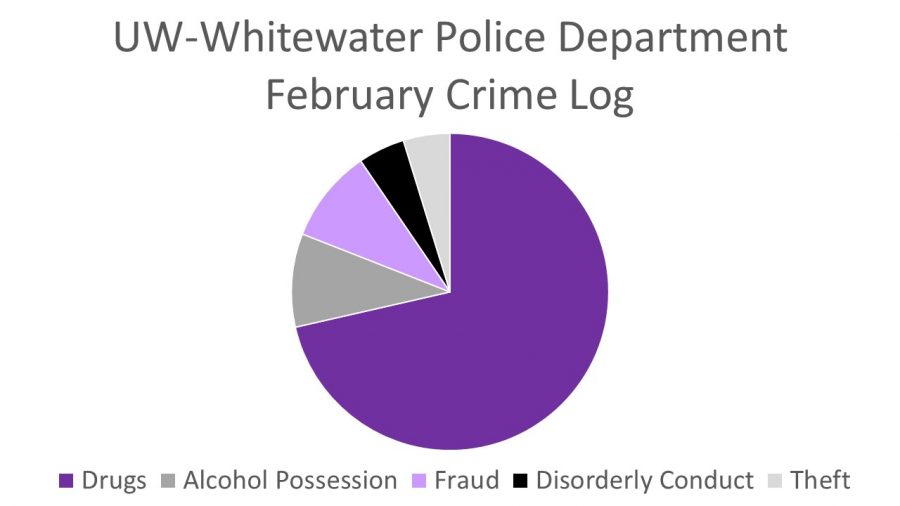 Drug-related offenses were the most common incidents reported by the UW-Whitewater Police Department during the month of February, but were down by far overall compared to the same time last year. The department reported just 15 drug incidents, the same amount as January, as officers continue to educate students about crime and safety on campus.

There has also been a noticeable drop in underage alcohol usage among UW-W students. The police department reported two underage alcohol consumption violations, two cases of fraud, one case of disorderly conduct and one case of theft. The incident reports resulted from officer initiated calls or anonymous complaints.

If there is crime on campus, it is generally a drug violation, according to UW-W police officer Savier Rodriguez. He tends to not come down too hard on students, but instead tries to offer second chances and educates about how the law works on campus compared to back home. For instance, many students that attend UW-Whitewater are from Illinois, where marijuana was legalized.

“Here at UW-Whitewater, we look out for one another as if we are family in that mentality. We put our best foot forward,” said Rodriguez. “It may be annoying to see us by dorms and driving through parking lots, but it is so crime does not occur. We appear not just when we are called, but to get to know students so they are comfortable to come to us if they ever should need us.”

The approach that the UW-W Police Department has taken with students has led to an appreciation for their work.

“I’ve had both positive and negative interactions with the police. If you’re misunderstood, they are very compassionate to work with you. I’ve been painted as a bad person, but as they cleared more information the situation cleared itself up,” junior Mitchell Matenaer said. “My friends brought a sign from home, which the police thought was stolen. We told them our story and they said we could consider it a lucky break. There was no worry because no one was going to report it. The police were kind of harsh, but they were just doing their job. I understood it.”

Included in the crime logs are case numbers, the time and date of each report and occurrence, the whereabouts of the incident, and a note concerning the disposition.

Cases mentioned in the disposition section may be labeled as cleared, cleared by arrest, inactive, referred to a correctional source, or under investigation.