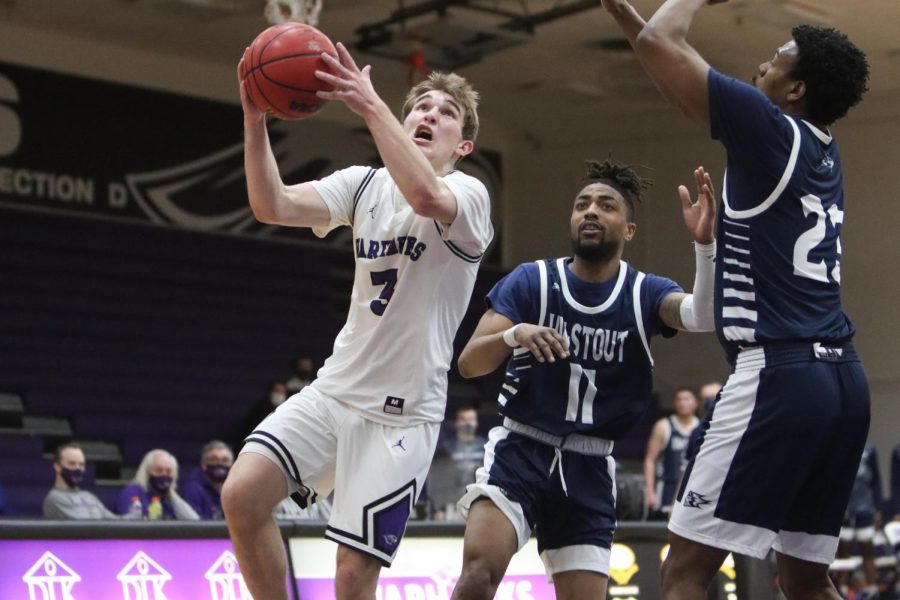 Sophomore guard Gage Malensek (3) drives to the basket during a regular season game between the warhawks and UW-Stout on wednesday Feb. 24.

The UW-Whitewater’s men’s basketball team season came to an end on Monday Mar. 1 after a hard fought loss of 81-76 to UW-River Falls in the first round of the Wisconsin Intercollegiate Athletic Conference Championship Tournament.

The Warhawks started out pushing the tempo, creating a fast start over the Falcons, which gave a 45-42 lead at halftime for Whitewater. The rest of the game was a back and forth affair with several lead changes. The Warhawks received important contributions all night from sophomore forward Trevon Chislom, who dropped 21 points and sophomore guard Gage Malensek who put together 17 points for the team.

UW-River Falls went on a run of their own toward the last six minutes of the half creating a six-point cushion, which kept the Warhawks from being able to grab the lead back. It was another tough “grind it out game,” but the Falcons won the battle in the end to advance to the next round of the WIAC Conference Tournament.

By the end of the week, UW-Platteville captured the 2021 Wisconsin Intercollegiate Athletic Conference (WIAC) men’s basketball championship with a 74-47 triumph over UW-La Crosse at Mitchell Hall Mar. 5.

The Warhawks competed well toward the end of the season losing their last four games all by just seven points or less, but that ended up resulting in a 1-7 record to close the shortened season. It was an unprecedented season for the men’s hoops team, but head coach Pat Miller expressed there were positives that can be built off of for the future.

“There were several takeaways this season. Obviously I was very disappointed in our record and very disappointed in our inability to finish games or execute at critical points in our games,” said Miller. “Another takeaway is we have a very young team, so it was a valuable experience for us. We were in position to win every game so I don’t know if our record truly reflects where we are as a team. I think we are close, we just have to make improvements in a lot of different areas.”

Another positive take away from the season is that the Warhawks now having two rising young stars in the program in sophomores Trevon Chislom and Gage Malensek. Malensek was a tremendous contributor this season leading the team in scoring at 20.5 points per game and assists per game with 2.8. Chislom averaged 13.9 points a game, 4.4 rebounds per game while shooting 52.9 percent from the field. Chislom knows what this team has the potential to be and knows what he needs to improve individually.

“Individually for myself I need to get stronger and put in more work defensively. On defense I wasn’t the best and should be able to go harder on that end,” Chislom said. “As a team we are a pretty young team. We all know what it takes to win. We just have to build on that next level to finish out games.”

Another contributor to the team who should bode well for the future is sophomore guard Brian Conaghan who averaged 23.8 minutes per game and shot 37.5 percent from the three point line. Conaghan also sees what can be done to get on the winning track next season.

“Just another year of staying on our program in the weight room will really help and it should lead to us to build up our bodies more. We played pretty well as a team, but we need to learn how to finish games down the stretch and that comes with some maturity,” said Conaghan.

With hard work the Warhawks have a bright future on the way for a potentially huge improvement next season. The men’s basketball team is looking forward to getting back in action next fall.