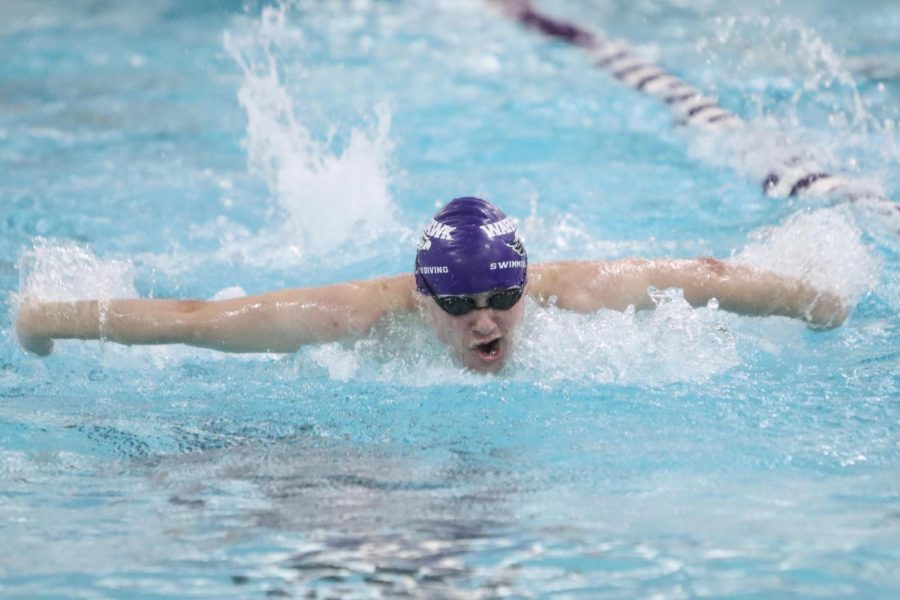 Freshman Jalen Stimes swims the butterfly for the warhawks during the team's final home meet of the 2020-21 season against UW-La Crosse, Saturday March 6.

Swimming is one of those sports where athletes cannot take off more than a couple weeks without getting out of shape and having to hit the reset button. So with the 2021 season finished, many Warhawk swimmers and divers are splashing into the local area pools and ponds.
Most athletes have a plan to stay in shape for next season. Some have decided to workout on their own and make up their own practices, while others will go back to their club teams at home.
“Over the summer I tend to focus on lifting more than swimming. It is super hard to put on muscle during the actual swim season since we burn so many calories. So I try to take advantage of the off-season and summer to make up for that,” says junior breaststroke swimmer Tyler Popke.
Since I will most likely not swim with my club team, I’ll be swimming on my own and creating my own workouts.”
The swimming and diving teams at UW-W are considered a collegiate team. This means that there is only a set season and the team only gets so many practice hours for the entire duration. This also means that the team is not allowed to swim year round with the coach or team.
“Swimmers who are members of their club teams at home are able to train and compete for those teams during the summer,” says head coach Elise Knoche. “There are no NCAA rules against training and competing with a club or YMCA outside of the season.”
So while most of us will be leisurely splashing around the pools, clear your goggles and stay in your lane. Because there just might be a Warhawk in the water.