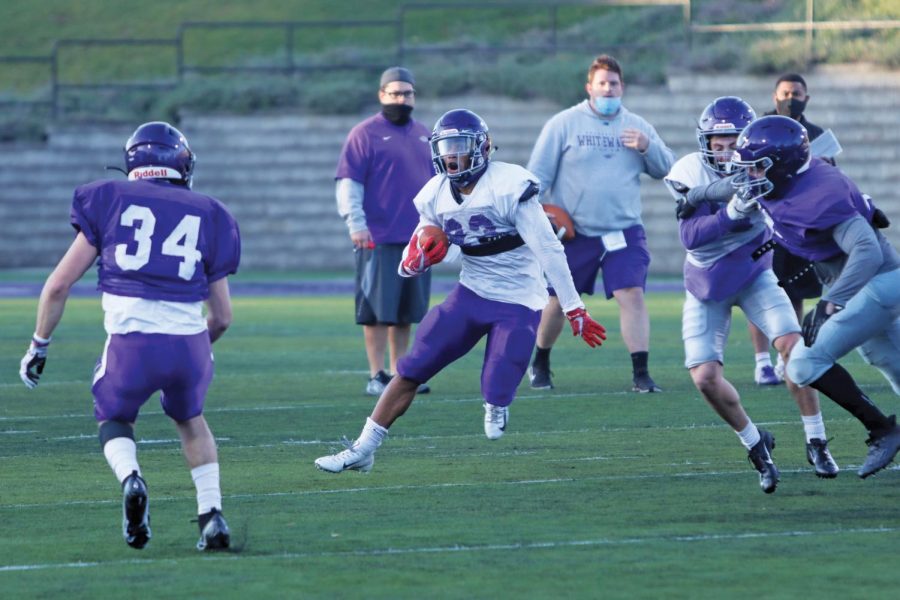 Senior running back Alex Peete (23) makes a move on a defender while running the ball, during a morning practice in November 2020 at Perkins Stadium.

The UW-Whitewater football program has not played a game since the the Division III National Championship December 20, 2019 against North Central (Ill.) in the Stagg Bowl. The program dealt with some unfortunate news when the 2020 schedule was cancelled, but that did not mean the work was going to stop.
The team stayed together and continued to put the work in over the fall, and continued into the spring. Head coach Kevin Bullis continues to be proud and excited for the program. He was thrilled with what the NCAA granted programs so that they could stay ready for the next season.
“The NCAA gave us 114 opportunities to have coaches train and practice with players. Traditionally we never have that many days to train, so that has served as our avenue on our way to be able to work with our players,” said Bullis.
As the team continues to work, current senior running back who will be a fifth-year senior come fall, Alex Peete is excited to see what will come out of the extra time now and this summer for the team.
“I see a lot of growth not only from the seniors who technically will be fifth-year seniors come fall, but a lot of growth from the younger guys as they have trained with us since the fall. So this spring gives everyone more development, which leads to better team chemistry,” said Peete.
Come this fall the hope is for the normal football scheduled season to be back to almost normal. Junior running back Ryan Ponick, who will be a senior come fall lets the fans know they will not be disappointed when competition begins again.
“We miss the fans as much as they miss us. What fans should expect is a group of extremely motivated human beings, and everyone on this team has something to prove. We are chomping to get back on a normal schedule. Hopefully there will be a full Perk and normal football Saturdays, but regardless this group is going to put their foot on the line every game trying to win,” said Ponick.
Football will be back sooner than everyone thinks at the moment, especially once the summer hits. Get ready because the Warhawk football program here at UW-Whitewater looks hungrier than ever and is excited to feel that support at Perkins Stadium.