The search is on 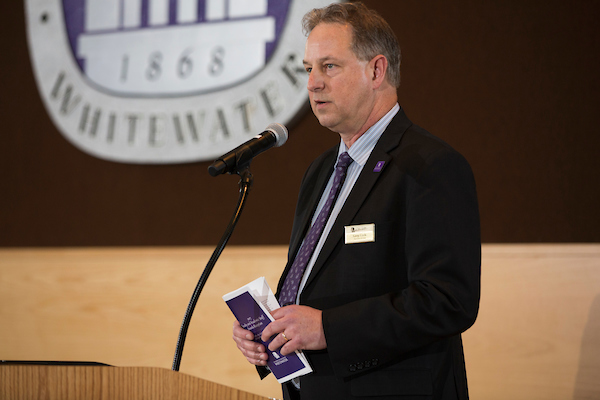 In light of the campus community meeting and welcoming the four remaining Provost nominees to campus, Royal Purple took the unique opportunity to interview Co-Chair of the Provost Search and Screen Committee Dr. Franklin Goza to get a deeper look into the amount of work and dedication that goes into selecting a new provost.

Dr. Goza Co-Chairs alongside Vice Chancellor Dr. Artanya Wesley, leading a committee consisting of 10 members who represent all four colleges, the Rock County campus, the student body, and members of the community.

The provost process first began with a national search by posting the job in national job outlets, and all applicants were reviewed and discussed by the committee. Each review took between 30 minutes and an hour. The committee then narrowed it down to 10 semi-finalists, and then five finalists who are officially announced. The five finalists visited campus last week for in-person interviews and meetings. The committee also conducted to Qualtrics surveys on those who met with candidates to better assess the candidates strengths and weaknesses. This week, the data will then be organized in a report by the chairs and committee members that will then be presented to Chancellor Watson.

“[In selecting the candidates] we discussed and reasoned out everything very carefully [as a committee],” said Dr. Goza. “I’m so happy that I had such a good group here because they really care about Whitewater.”

Royal Purple also wanted to get a comment from Provost Cook who will be stepping down from the position very soon. Unfortunately we were unable to connect for an interview, but he graciously emailed us a statement.

“I’ve been the Interim Provost for two years, filling in until the university can conduct a search for a more permanent Provost. It’s my honor to serve as Interim Provost. This is a great university with talented students and amazing faculty and staff,” said Cook.

“The Provost is the Chief Academic Officer of the University, and, in my opinion, should have these important qualities: One, a deep belief in and support for our academic culture; two, genuine and firm commitment to shared governance; and three, an inspiring vision and keen ability to lead UW-Whitewater to continuously improve so we educate more and more students,”

Provost Cook has been at UW-Whitewater 31 years and 34 years in the UW System. He will be retiring June 30.