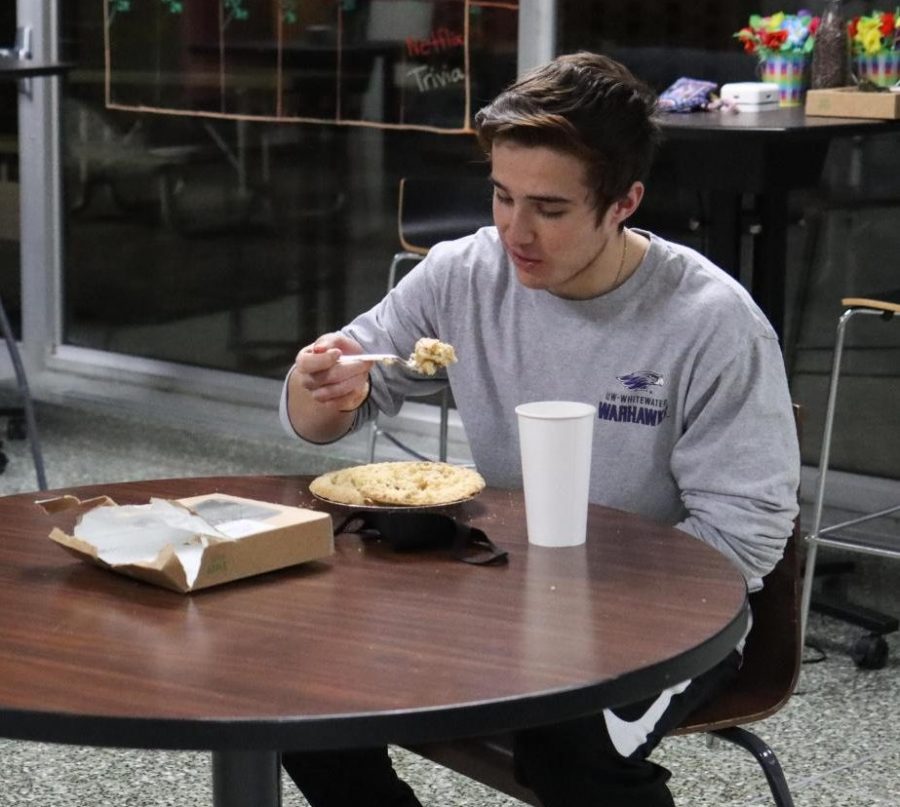 Michael Maher prepares to take a bite of pie while competing against sophomore Lauren Stein in the pie eating competition held at Jitters Coffee Lounge.

Although March 14th may seem like a typical day for many, for Jitters Coffee House the 14th was an opportunity to ring in the celebratory Pi Day with an indulging and tasty pie eating contest. As a holiday Pi Day is recognized not only as a mathematical constant for mathematicians worldwide but also as a day for Pie lovers to treat themselves to the delicious pastry. On Pi Day for many bakeries and pizzerias often they will offer deals on the 14th due to many of their products coming in the ideal circular form.

Despite limitations from COVID, Jitters still found a way to make the celebratory contest happen, limiting it to 6 participants total split evenly between 2 rounds.

“Everything almost went as planned for the contest however Walmart unfortunately ran out of Apple Pies! They were all originally supposed to be Apple Pie and we even called Walmart to plan ahead, however we still have to substitute two cherry pies. But pie is pie at the end of the day!” said Jitter’s Program Director Michael Maher on little obstacles for the event.

As a competition the main objective was for the contestants to finish their miniature pie faster than the surrounding competitors.

“Winners ended up getting a Jitter’s mug and coupon for one free drink. Since one of our board members competed and ended up winning, he gave up his prize to the second-place person!” said Jitters Volunteer Daniel Davern on prizes for the winners.

For future Pi Days, math fanatic or not make sure to celebrate the holiday for mathematicians worldwide by scarfing down on your favorite pie while perhaps also measuring the diameter in the process!