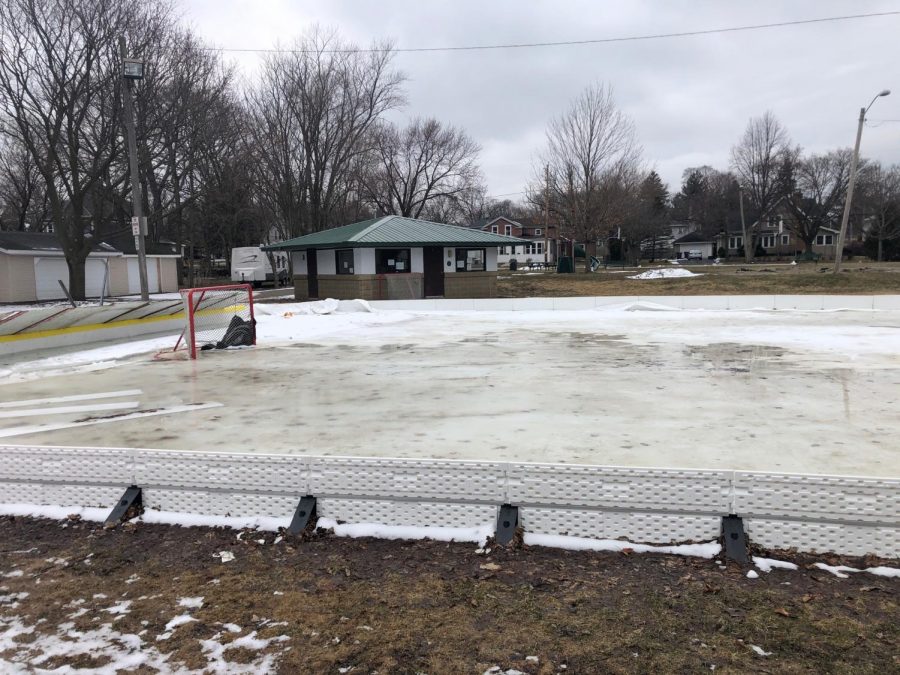 Nestled inside Big Brick Park sits Whitewater’s very own ice rink.  The rink, which was built a few years back, is accompanied by a basketball court, a playground, and a warming house for visitors to the ice-skating rink.  Located on Center Street, the ice rink gives residents of Whitewater a place open to the public to play hockey or just skate for leisure.

“There’s a lot of college kids and high school kids that like to use it to play hockey, and during the earlier part of the day you’ll usually see some parents with kids skating out there.” Brian de la Torriente is the athletic program coordinator for Whitewater’s Parks and Recreation department.  Unfortunately, this year’s skating season was a bit shorter than most due in part to the weather conditions faced by the department this past winter.  Large snowfall such as what the city saw this past January is part of the problem of the logistics for running an ice rink.  This accompanied with temperatures that stayed in flux all through December made for a challenging season. The rink was only running for about 4 or 5 weeks from January to mid-February where ideally if weather permits, De la Torriente says they like to have the rink up and running from Dec. to Feb.

Many different things factor into how an outdoor ice-skating rink can be set up for public use.  Things such as the right density of the ice so skaters don’t fall through and tear the tarp underneath the rink.  The weather can be a major part in this if higher temperatures turn the hard ice into slush.  These are some of the challenges that the Whitewater Parks and Rec department must account for and adjust too.  Facility maintenance worker Dan Buckingham described some of the processes of working through these challenges.

“It’s nice to make sure all the leaves are down… because all of the sudden you get the darn tarp picked up and then you put everything down nice and then all the sudden you get a really windy day and then the ring fills in with leaves.”  Buckingham described how the leaves in the freezing ice can create hot spots that can turn into bumpy portions of the ice.  These are just some of the challenges that go into making a quality ice rink.

An added feature to the skating rink is a public warming house.  Set off just yards from the rink, the small building provides a warm sheltered area with a bathroom and seating for visitors to the rink and park.

“We use that just for people to go in and obviously warm up or put their skates on… there’s a restroom and a water fountain, benches for people to hang out in there.” De la Torriente also added that new this past winter season the Parks and Rec Department added a timer charged spot light to the ice rink so skaters could use the ice longer through the shorter winter days.

With the obstacle of weather and up keep, the planning and running of events or leagues is a struggle for the parks department.  But for De la Torriente there is still a hope for this in the future.

“We’ve talked about trying to do possibly an ice hockey league down there or maybe during like some sort of an event, but like I said it’s difficult sometimes because of the weather.”  For now, the rink will be closed for the season, but if interested, the hope is that by the middle of Dec. the rink should be up and running again.