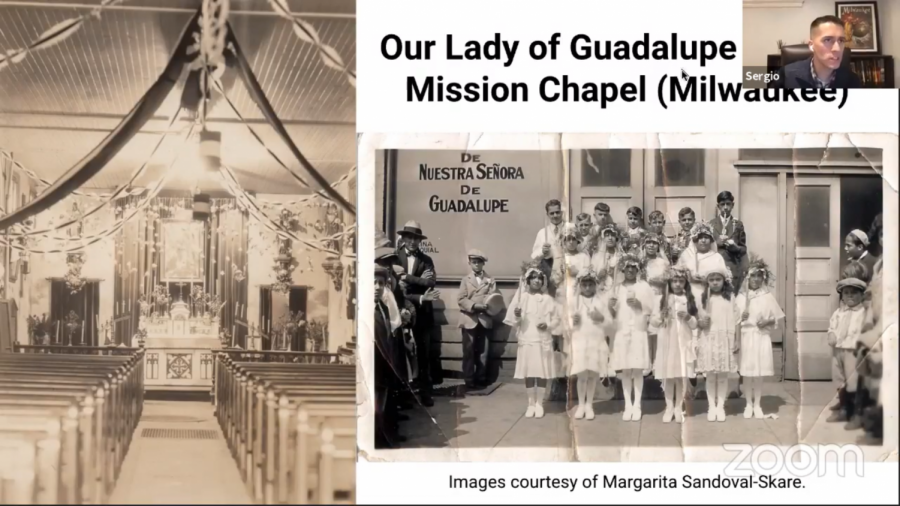 Sergio Gonzalez started studying the history of Wisconsin’s Mexican and Latinx Communities while being a middle school teacher. He went back to graduate school to hopefully fulfill a desire of completing his dissertation on something that mattered- something that had passion. He wanted to make an impact.

He chose to study his family. Most specifically, why his ancestors, his parents, his grandparents, why they chose Wisconsin.

Assistant Professor of Latinx Studies at Marquette University, Sergio M. Gonzalez presented about the histories of Wisconsin’s Mexican and Latinx Communities at Irvin Young Library to talk about his own history, as well as many others in the Latinx community on why they chose Wisconsin to become their home.

Gonzalez was born in Milwaukee and has grown to love the community he was given. But in his dissertation, he wanted to understand how Milwaukee became a home for the Latinx Community.

Initially? He found one box from the Milwaukee Historical Society.

He thought it was his doom. Instead, it gave way to a piece from the Milwaukee Journal Magazine. He and his own parents graced the cover of the magazine. Him, only a few months old.

The headline read “The Pulse of Hispanic Milwaukee,” and it helped Gonzalez choose to focus on how religion could create a community of people, and how churches could help create a sense of home for marginalized communities.

Currently, there are approximately 340,000 Latinos living in Wisconsin -according to the 2010 census. Those numbers are expected to jump up closer to 500,000 according to demographers in the upcoming release of the 2020 census.

After being essentially ostracized from the community in Wisconsin, Latinos made their own mission to make a community, creating churches, baseball teams and the Our Lady of Guadalupe Mission Chapel, which would eventually become a welcoming sight to all Latinos.

They still found a way to make their presence known.

The Mexican government was keeping an eye on what life would be like for citizens leaving Mexico for the United States. To help create a more open space, several migrant projects were made to welcome Mexican Americans to the community.

Papers would claim racism was solved. However, they missed the mark. Their social presence wasn’t welcome in ways that their work was.

The Milwaukee Sentinel claimed, “Migrants crews… are an economic asset to the state and make the difference between success and failure in many of our harvesting operations.”

They offered service, and that was why they should be kept – not their own persons. Their living situations were deplorable. Their bathrooms were tin cans.

Inspired by the Civil Rights Activism Movement, the Migrant farm workers chose to do the same. They marched from Wautoma to Madison demanding that they be respected as not only workers, but human beings as well. This movement would inspire many across the state, eventually organizing throughout Milwaukee to fight against police brutality as well as other issues that are still brought up today.

Gonzalez ended his presentation with one question: What does it mean for Latinos to make certain counties their home, even when it was previously dominated by a white population?

To view the entire lecture on the history of Latinx and Mexican communities in Wisconsin, visit the link  at https://www.facebook.com/ILYPL/videos/371745520512436/?__so__=channel_tab&__rv__=latest_videos_card.