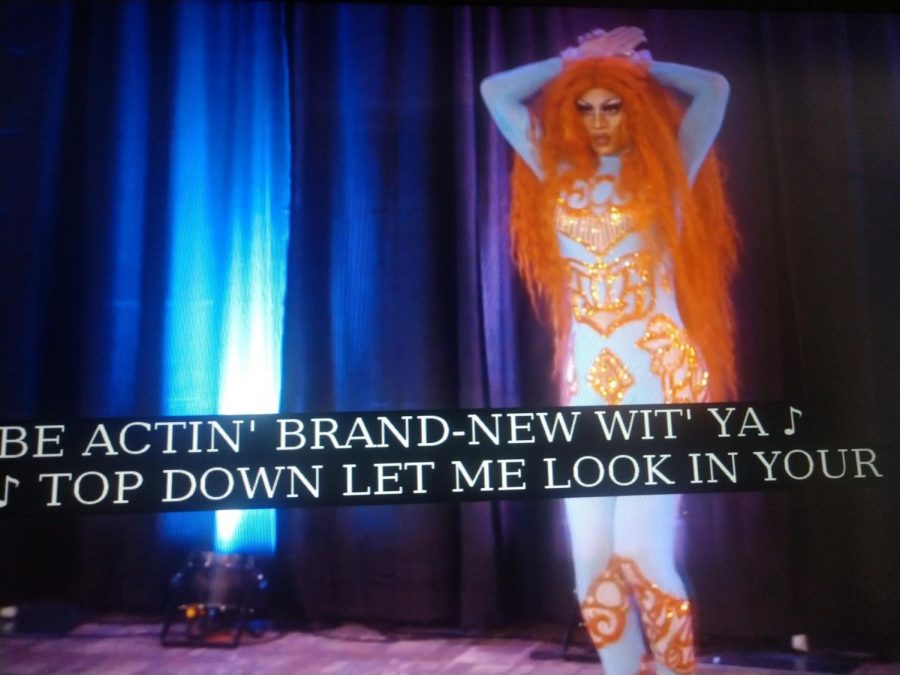 The professional Drag Queen Melee lip-syncing and dancing to the music for the 12th Annual IMPACT Drag Show.

The UW-W IMPACT organization held its 12th Annual Drag Show March 25th with the theme of Dungeons and DRAGons aired on the UWW-TV for the campus and LGBTQ+ community. The drag show encouraged people to join in on the fun by dressing up as queens or kings when they watch the premiere. The event is held to help people in the LGBTQ+ community express who they are and celebrate that with fellow Warhawks. The queens celebrated the drag show by showing off who they are, dancing to the music, lip syncing to songs, and just having fun in highly stylized outfits and makeup.

“Drag has, historically, been one space where people were given the freedom to play with gender and performance. This is true even in historical contexts when it was considered highly taboo and illegal to wear clothing of another gender. While the politics informing drag have changed over time, one thing that remains constant is that drag provides space to play with, think about, express gender in new and creative ways,” said the LGBTQ+ coordinator Stephanie Selvick on what the importance of Drag.

That the organization was able to do the drag show even during the pandemic was important for the community this year and worked out in the end for the students.

“It’s extremely important to have because specifically this year we don’t have many events going on, especially with the plus community. There’s a pandemic going on and we can’t do much. And this event has always been huge. We’ve sold out for multiple years in the past. It was a night to get dressed up and go out with your friends and just have a good time. And we had to cancel it last minute last year, because we literally went home the day of the drag show. Everything got canceled. It was sad. It was heartbreaking, I was like, we can’t do that to our students again. And it took a lot of extra planning this year to figure out how to make it happen virtually,” said IMPACT event coordinator and show director Alex  Koon.

The drag show consisted of many professional drag queens that came to be a part of the event to show how important it is, and join in on the fun. The professional queens included Malaiya Marvel, Victorya Attwood, Melee, Phelonee, and the Dungeon Master was Bryanna Banx$. They showed off their costumes, makeup, dancing and lip-syncing to show how much fun it is to be who they are no matter what. The IMPACT organization couldn’t set up this drag show without some help from people at UW-Whitewater.

This was an event to help people come together as a community to embrace who they are, accepting everybody, feeling like they belong, getting dressed up, and having fun with your friends while watching this event. While the pandemic is a ‘drag’ for us all being kept apart, this drag show had the opposite effect in bringing us together for some fun.