Conference dominance continues on the diamond 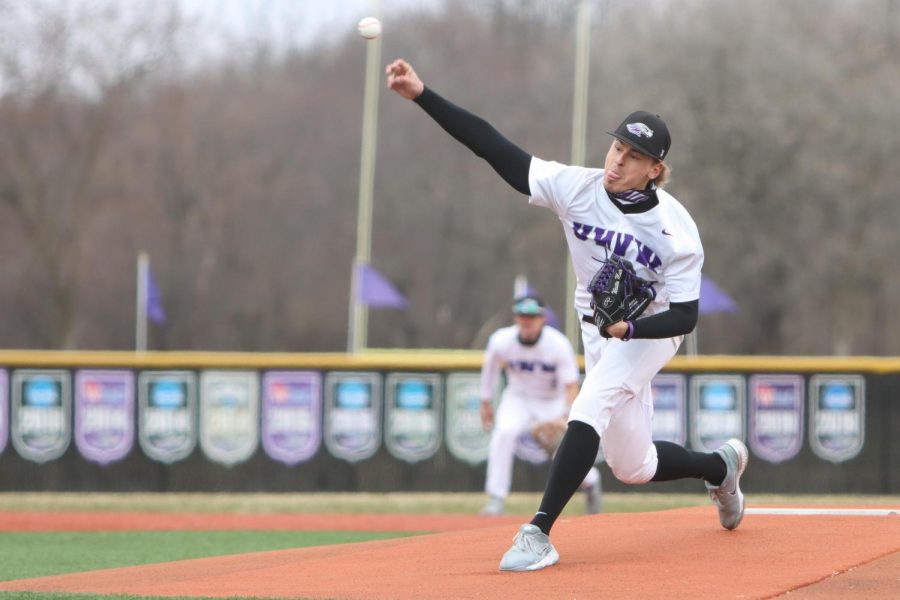 Junior Pitcher Westin Muir (18) leans forward to throw the ball towards home plate, during game one of the Warhawks doubleheader against UW-La Crosse Wednesday March 31.

The Warhawks began Wednesday’s double header against Lacrosse with a five-run first inning to continue their hot start to the season up to bat. The great play continued for Whitewater across the field in the second inning when sophomore right fielder, Jacob DeMeyer made an once-in-a-lifetime diving catch in foul territory. The highlight reel play was heard country-wide as the play landed him a spot at number five on the top plays of the night on ESPN’s Sports Center Wednesday night, March 31. DeMeyer also drove in one of the five runs in the first inning too. DeMeyer had nothing other than excitement after his incredible performance.

“It was pretty awesome to come down with that catch. Then I was really surprised to see that I made it on ESPN, I didn’t really think that was going to be possible,” said DeMeyer.

The Warhawks had more success on the bats with four more runs in game one, and Lacrosse was able to put together two runs. The two runs were not enough though to stay with Whitewater for the Eagles. Whitewater won game one 9-2 to continue their undefeated record in the conference.

Game two was a similar story for both squads. Sophomore left fielder Matt Korman put together a spectacular game, hitting two two-run homers to help score four of the eight runs for Whitewater. Korman’s homers came in the fourth and seventh inning, providing the spark the Warhawks needed.

“It’s always a great feeling seeing a ball go over the fence and seeing two in the same game is something that is an unreal feeling. Going into that game I had been starting to feel really good at the plate and making a couple small adjustments throughout the day to get my swing off and just seeing the ball really well,” said left fielder Korman.

Lacrosse could not put together much of anything as they could not compete with Whitewater’s offense again. Whitewater tallied another win 8 – 3 over Lacrosse, to continue their hot streak. Matt Korman expressed why the wins keep coming left and right for the Warhawks.

“Honestly our team has just been playing with a lot of confidence. We’re a very close group and are always doing whatever we can to help our team win. We have a lot of talent but we just have to continue to work everyday and keep playing good baseball,” said Korman.

Whitewater and Lacrosse battled one more time in a doubleheader again on Friday. This time the outcomes were a bit different than how the first doubleheader this week went. The eagles of Lacrosse got off to a quick start when third baseman, Mac Born scored a RBI triple to give Lacrosse a 1-0 lead. Though whitewater bounced back scoring two runs in the fourth inning from a two RBI single by third baseman, Ben Wilkins.

The rest of the contest went in Lacrosse’s favor as they were able to continue to score a few more runs while Whitewater could not. Lacrosse won game one of the doubleheader 5-2 to finally put together a win after struggling earlier in the week against the warhawks.

After losing their first conference game of the season, Whitewater was not going to dread the loss instead they got right back to what they have been so successful with all season, hitting the ball. The warhawks started game two of Friday’s doubleheader by scoring nine runs in the first inning.

Whitewater stayed in control the entire game and did not allow a hit from Lacrosse until the last inning of the game. The warhawks closed the series with Lacrosse by not only defeating them but demolishing them 19-2. Whitewater improved to 9-2 overall and 3-1 in conference. Head coach John Vodenlich loved the response by his team to end the week.

“You know we did not get the bats going in the first game and we ultimately struggled a bit. I think struggling a bit really opened the team’s eyes up so we got a perfect opportunity to bounce back immediately, and they indeed did that,” said Vodenlich.

Next up for the warhawks is another week of facing UW-Oshkosh. The two face off for a doubleheader on Tuesday April 6th at 1:00pm for their first matchup of three for the week.