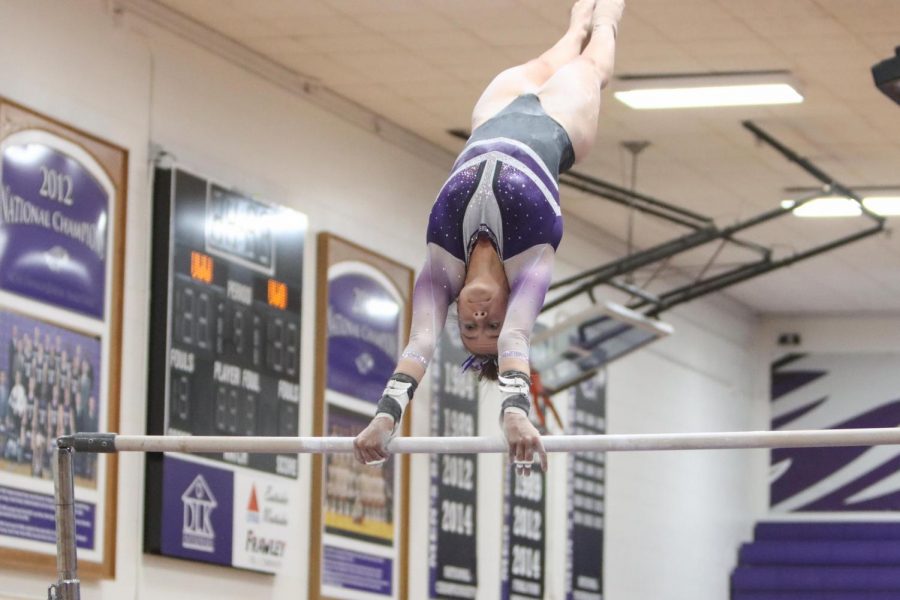 The women’s gymnastics team concluded their season on April 3 against UW-Oshkosh. This Saturday was a special day for the Warhawks since it was their Senior Day and last time they would compete with seniors Blaise Wilson and Vanessa Olinger. The Warhawks flipped their way to victory one last time winning the meet 188.050-186.975.

The energy and the atmosphere of this meet is what made this a special day for the Warhawks. Knowing that this Saturday would be the end, the Warhawks cheered on each other and hyped one another up so they could do their best and leave the meet satisfied with their performance.

“This season has definitely thrown a lot of obstacles at us, but we’ve been really capable of adapting and being okay with that – no gymnast are not okay with that, but we really have challenged ourselves to be okay with that,” said sophomore Karina Sabol.

“Our goal is to improve by two tenths on each routine each week. We don’t necessarily get worked up about the score because those are kind of out of our control, but we worry about our performance,” said head coach Jennifer Regan.

To conclude the night, the team had a mini service to recognize the seniors. Both seniors Blaise Wilson and Vanessa Olinger got to shake hands with Dr. Dwight C. Watson, the Chancellor, and the team played a little video college to honor both seniors. The Warhawks will continue to remember all the good times they had with both seniors and will take their knowledge and advice with them in future meets.

“Vanessa is amazing. She brings the attitude in the gym, she teaches us all to show our routines and show our confidence. It’s something that all of us are working on, but she’s still a great leader in that aspect. Blaise continues to push us harder and make us efficient. When we are in practice for 5 hours sometimes she’s the one who has the high efficiency and pushes us to do better so she’s great at that,” said Sabol.