Warhawks baseball stay atop the conference 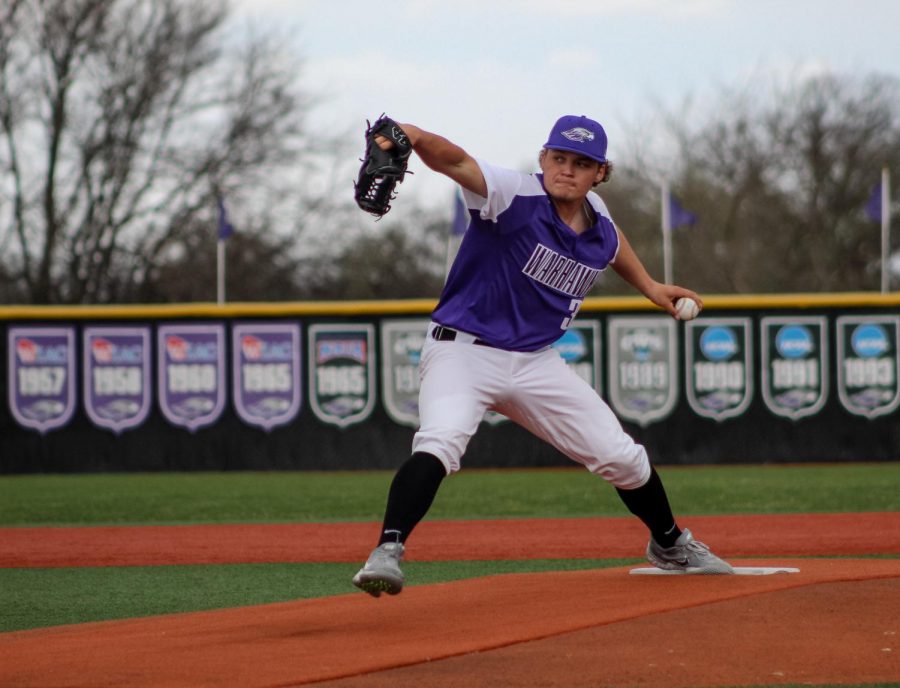 During the first game of the doubleheader against UW-Oshkosh, Freshmen Pitcher Donovan Brandl (34) throws the ball to home plate, Friday April 9.

UW- Whitewater`s Baseball team took on a four-game home and away series this past week against conference rival UW- Oshkosh. Whitewater would go on to sweep the series and improve to 13-2 on the season, sitting atop the WIAC standings.

The strength of Whitewater so far this season has been its explosive offense and it proved to be once again this week scoring on average of over nine runs per game.  This included an overall dominating performance by UW-Whitewater as they shut out Oshkosh in the first game of the home double header on Friday 15-0 as Whitewater recorded 18 hits, seven of which were doubles.

“I think we just try to stay composed and take it game by game.” Sophomore outfielder Matt Korman went on to cite Head Coach John Vodenlich on the approach he and his teammates have taken during their successful week at the plate against Oshkosh.

“Coach Vodenlich always tells us we are playing the game and not the opponent. Which I think we have really bought into and not focusing on who we are playing and just going out and playing baseball.”  Korman himself was on base 5 times with a pair of RBIs during the 4-game series against Oshkosh this week.

Other solid offensive performances for the Warhawks included infielder Nick Santoro who had hits in all four games including a 3-run homer in the first inning of Tuesday’s double header.  As well, Pitcher Donovan Brandl threw seven scoreless innings giving up only two hits in the 15-0 victory.  Head Coach John Vodenlich spoke about his teams’ approach against Oshkosh this year.  “They are a quality opponent with a lot of talent. We have focused our efforts on playing against ourselves in the game itself. Our philosophy is to compete one pitch at a time. Luckily that has worked.”

One aspect of the game that Whitewater has looked for a little more consistency in is in their pitching staff.  While the Warhawks have gotten solid performances from its starters, pitchers coming in for relief in the later innings have yielded some runs.  Although there have been instances of shutdown relief work such as Connor Moroder`s four innings of shutout pitching out of the bullpen in Fridays second game in the win against Oshkosh, Coach Vodenlich is still looking forward to more consistency.

“We will continue to emphasize command and strike percentage. As our relievers throw more innings, they will get more comfortable which will lead to improved performance.” Despite some of the ups and downs of the bullpen, the starting staff for the Warhawks has fared very well overall to start the season.  One of which, Westin Muir, has started his season 4-0 as a starter with just a 1.23 ERA.  Most of Muir`s outings have showcased his ability to get outs via the strikeout recording nine in his last start against Oshkosh on Tuesday.  But more has played into how well he has pitched than just punch-out’s.

“I am always just looking to stay ahead in the count and dominate the hitter. That doesn’t always mean I’m going for strikeouts, because pitching to contact is still important. However, punchouts are still the most fun part of pitching and they tend to create some energy in the dugout which is always nice to have.”

The starters for Whitewater have been a massive part of the team’s success as they have complimented the high-powered offense with solid outings nearly every game.  On average, UW- Whitewater’s starts are giving up less than a .200 batting average to opponents this year who have a group ERA of under 2.50.

UW- Whitewater baseball will next have a home and away game against UW- Platteville and then a huge three game series against Stevens Point who is right behind Whitewater in the WIAC standings.