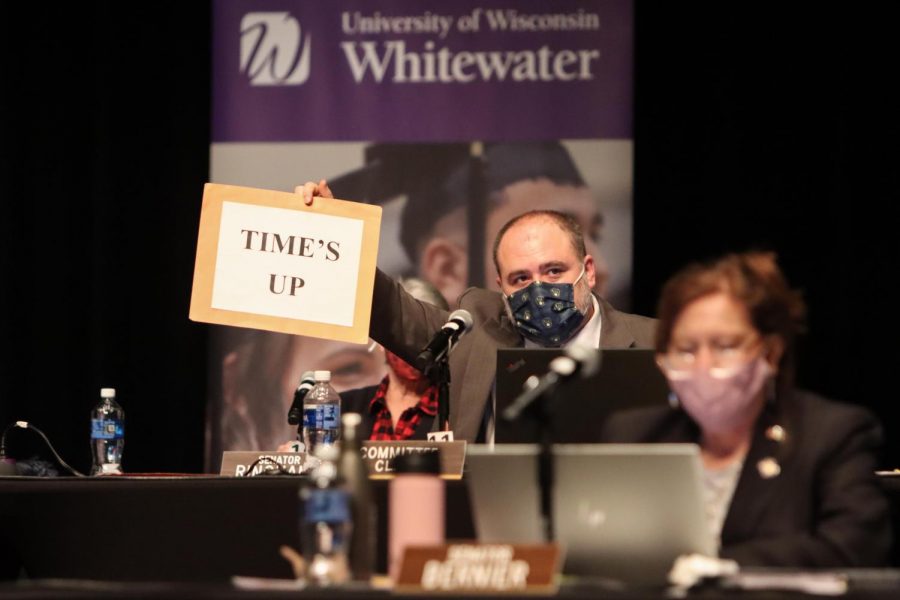 Joint Committee on Finance Clerk, Joe Malkasian holds up a sign to inform a speaker that they have no more remaining time, each speaker at the public hearing was allowed two minutes of time.

The Wisconsin State Legislature Joint Finance Committee sat through a six-hour marathon of testimonies Friday, April 9 in the Young Auditorium. The hall was filled with individuals gathered to represent a variety of organizations and interests throughout southeastern Wisconsin.

This was the first time the committee has come to Whitewater for a hearing. State Sen. Howard Marklein received his accounting degree from UW-W and later served as president of the UW-W Foundation.

The meeting opened with a statement from UW-W Chancellor Dwight Watson, welcoming the representatives on behalf of the campus. His speech included a piece supporting the proposed $59.44 million renovation projects of Winther and Heide halls.

“The building [Winther Hall] was designed to instruct students more than 50 years ago,” said Chancellor Watson. “The building needs extensive renovation to meet the space and infrastructure needs of the modern college.”

The Whitewater Student Government (WSG) spoke on behalf of the renovations of Winther and Heide halls, but also on other initiatives such as the Wisconsin Tuition Promise, which supports the financial needs of students whose parents make below $60 thousand dollars in income. WSG President Jodi Wentworth brought up the fact that in order for a student to pay for a $19 tuition on their own, working a job that pays $10 an hour they would have to work 19,000 hours, or 36 hours a week on top of a full course load.

“Every person deserves the opportunity for a higher education,” said Wentworth. “They shouldn’t have to sacrifice everything to get it.”

Whitewater City Manager  Cameron Klapper testified on behalf of the City of Whitewater and Wisconsin Municipalities, regarding an adjustment to money limits provided to the city and the other 361 Wisconsin municipalities by Municipal services.

“The city of Whitewater lost out on $527,000 dollars,” said Klapper. “There are many reasons why we would ask the committee for this adjustment to money limits, but these money limits have not been able to keep up with the increased cost of living and cost of operations.”

Others were on behalf of city’s, school districts, various for-profit and nonprofit organizations and their affiliates. Many testimonies came from representatives affiliated with the non-profit WISDOM. WISDOM is a non-profit centered around ecumenical involvement of people of different religious affiliations that work together toward, “linking communities across Wisconsin to work for justice.” EXPO (Ex-incarcerated People Organizing), MOSES (Madison Organizing in Strength, Equality and Solidarity), and MICAH, in affiliation with WISDOM, spoke urging representatives to turn the budget toward helping with mental illnesses – especially among the formerly incarcerated, the underrepresented and the disabled.

Testimonies ceased an hour earlier than was expected to which the representatives invited anyone who was unregistered but wished to speak. The meeting closed shortly thereafter.