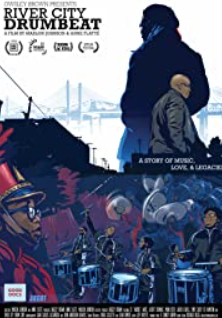 “Provide a structured environment and support system to stimulate youth as community leaders and create a community where live music is enhanced and strengthen through the “Spirit of the Drum”’, states the groups vision statement.

The documentary shares stories about growing up in tough communities and what music and the arts can do for kids. It’s an uplifting film that makes its viewers think about all the things they have to be grateful for. In addition, the documentary shares a story about African American history. For example, although many people think Louisville was not too involved with slavery, the city still has its fair share of slavery roots. Many of the effects of slavery are still felt today which is why these young kids have so many problems to deal with today. The River City Drum Corp is such an effective program because it offers drum classes for kids from a young age, all the way to their high school graduation.

Overall, the film is an interesting documentary  that teaches its audience about African-American culture and its past. While things are getting better, a city such as Louisville still deals with lots of violence today.