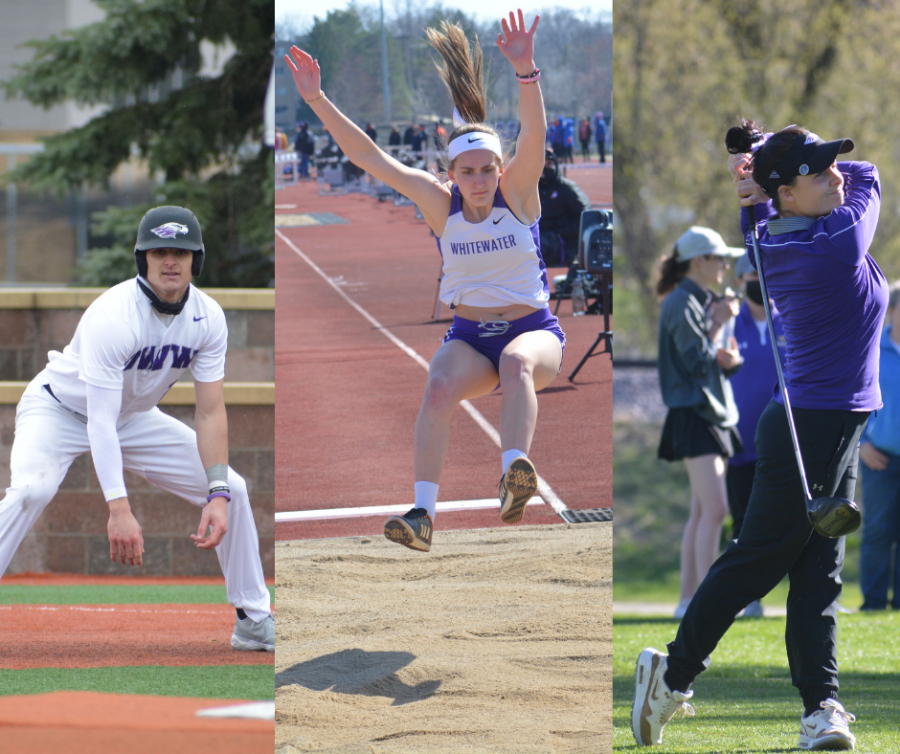 Student athletes are an important part of the culture at the University of Wisconsin-Whitewater. With the semester coming to a close it is time to recognize a few student athletes whose careers’ are coming to a close in their respective sport and in the classroom. Nick Santoro, Shelby Nickels and CheyAnn Knudsen are a few of those Warhawks that will bleed purple until they are long gone from this university.

Nick Santoro, a senior middle infielder for the baseball team has endured quite a career on the diamond. As a sophomore Santoro made his name known across the division three level, by being named first team All-Wisconsin Intercollegiate Athletic Conference and second team American Baseball Coaches Association/Rawlings All-Midwest Region. With all the success and great memories, Santoro is thankful for everything that has come with being a Warhawk over the last four years.

“The biggest takeaway for me is all the connections I made, and all of the great people I was fortunate enough to meet. Along with that, I like to reflect on all of the great memories I have made with these people. Some of my greatest memories are from the times I spent with my teammates. Including playing in some of our more important games like the conference tournament, and playoff matches, and also just spending quality time together off of the field. I like to think about our spring training trips to Florida every year, because I have a bunch of good memories down there while living in houses with my teammates, and it was always fun to be able to hang out with them before and after games,” said Santoro.

Santoro could not build off an incredible sophomore year in 2020 due to a season getting canceled due to Covid but he is not taking anything for granted in 2021.

“I want this team to be as successful as we possibly can, and I want to win a national championship. I have already seen a whole lot of great talent pass through this program without a ring, and I do not want that to happen again this year. We have the team to do it, and I am just excited to go through it all with this group of guys. I am excited for this team to show everyone what we are capable of, and I personally, am going to enjoy every second of this season,” added Santoro.

The next senior that as well has had a memorable career at Whitewater is women’s golfer, CheyAnn Knudsen. Knudsen’s first three years so far at Whitewater she has been named first team All-WIAC and conference player of the year in the 2018-19 season. She has taken hold of some program records to cap off her career including, best 18-hole score (71), best 54-hole score (228) and best 72-hole score (315). With her success it is safe to say Knudsen has been one of the best golfers ever to come to Whitewater, shown it with her excellent play and humbleness. Knudsen has been a part of some great memories as a Warhawk.

“I would say there are quite a few memorable moments for me because as a sophomore coming in my team hadn’t won a conference championship since 1998 or 1999, so we were the key to winning the conference. As it was kind of a surreal feeling because I hadn’t really won anything too big before so winning conference meant going to Nationals. So I just was most proud of my team winning three conference championships and hopefully this year making it a fourth,” said Knudsen.

Knudsen is also excited for her future as she is an education major and already accepted a position. She is going to be a 7th and 8th grade ELA Social Studies teacher at Sheraton Community School District. Though just because Knudsen has her sights set on being a teacher doesn’t mean she is done with sports.

“At some point in my life, I would love to coach golf, which helps being a teacher so my schedule would work around that. It would be a dream to coach a big college program, so who knows what could happen if I go to get my masters and become a professor down the road,” said Knudsen.

The last senior to honor is Shelby Nickels who competes in short sprints and long jumps for the women’s track and field team. Nickels has been an amazing competitor in the long jump and honored many times including, USTFCCCA All-American in the long jump (indoor 2020), 2020 NCAA Indoor Championship qualifier in long jump and Wisconsin Intercollegiate Athletic Conference champion (first team All-WIAC) in the long jump. Nickel’s decorated career has included many other accomplishments as well but there was one memory certain that she will never forget.

“I would say my favorite moment was last year’s indoor conference at Oshkosh and I was in the long jump. In the prelims I scratched my first two jumps, so I was very nervous for my third jump because if I scratch again I wouldn’t even have a chance to place. I was able to get my last jump in and get into the finals, after that each jump progressively got better. I was then able to get my best record of the season and take first in conference, which led me eligible for going to nationals to compete in,” said Nickels.

Nickels as well has her future decided as she accepted a job already for a company called Lakeside Foods where she has done an internship for them the last two years. She majors in accounting and finance, so she will be working in their accounting department full time once she graduates.

As Shelby Nickels career comes to end she has some final hopes and aspirations in track and field.

“My biggest hope is to PR in long jump, especially after last year’s outdoor season being cancelled really was hard so I hope I can come out this year and be able to do better like in the past. Then to place again in conference and maybe have one last shot at Nationals,” said Nickels.

Santoro, Knudsen and Nickels have shown over their time what great examples they are at UW-Whitewater with what it means to be a student athlete. All three have great future endeavors and will look to close out their athletic careers on top over the next few weeks.