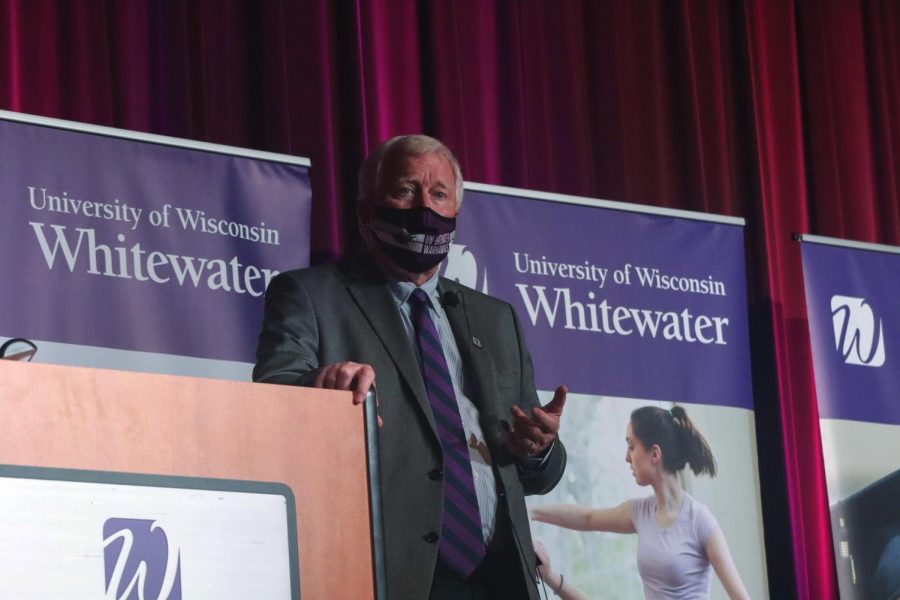 Interim Chancellor Jim Henderson answers a students’ question about his take on diversity and inclusion on campus during Warhawk welcome, Tuesday, August 24th.

Interim Chancellor Jim Henderson discussed university goals moving forward during an in-person “Welcome Warhawks” event, including areas of struggle for the university such as enrollment and budget.

Since 2019, the university went through four different chancellors leaving uncertainty for some about what is to come this year.

“I think this academic year, like all academic years, has a lot of promise, a lot of potential and some uncertainty. I think as we move forward with this year we’re all anxious to see what plays out,” said Henderson.

The interim chancellor laid out three goals to help clear up the uncertainty that some are feeling.

A search for a chancellor was one of those goals.

“I am encouraging the system to not start a search mid-year. This campus deserves the very best candidates and when you start the search for a chancellor mid-year it puts you at a disadvantage,” said Henderson.

This process is run through the board of regents, where they appoint a new chancellor with the help of a search firm, Henderson explained. It is unclear if they will start the process as the interim chancellor hopes.

The university is doing well with new student enrollments but experienced issues with returning students.

“Retention, especially with first generation low income students, is always tricky and when you throw in [Covid-19] and all the challenges there, it makes it even more tricky,” said Henderson. “Other campuses are feeling this but it’s something that a campus that relies heavily on tuition really has to work at.”

His solutions, with help of the Cabin, are to boost the budget for student workers, improve marketing, and pay off debt for students who have yet to return to campus.

Figuring out a budget has been an ongoing issue for UW-Whitewater and that is his last and final goal for the academic year. As a former chair of the budget committee at Colorado and various other experiences with budgets during his professional career, Henderson has grown to be very passionate about budgets, he said.

“Budgets are something I care passionately about and everyone in the community has to understand what the budget situation is, how the funds are being extended and what the current position of the university is,” said Henderson.

A presentation on the budget will be held “sometime in September.”

Issues and policies concerning Covid were also addressed. The university announced earlier this month new policies for the year – masks are required indoors for everyone and weekly testing for unvaccinated individuals that visit campus will also be required.

The interim chancellor read a statement from University of Wisconsin System President Tommy Thompson to reiterate the continuation of the university safety guidelines. .

“The UW-System is not required to seek political approval for every internal management decision nor should it. The effort to mock the UW-System authority is both wrong on the law and wrong as a matter of public policy. I have no plans to abdicate this responsibility,” said Thompson in the statement.

Henderson stated his position on July 1 following the resignation of Chancellor Dwight Watson. He is a first generation college student from rural New Mexico. He attended the University of Texas in Austin where he earned a bachelors and masters in mathematics. He then earned his doctorate at the University of Wisconsin- Madison