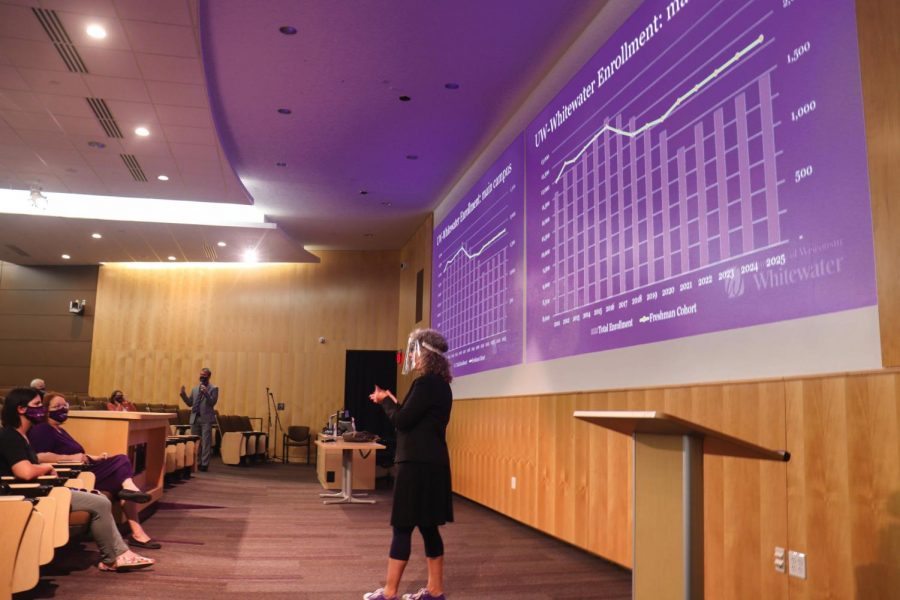 New Provost John Chenoweth led the Academic Affairs Fall Forum this year centered on COVID-19 requirements and enrollment.
As of Aug. 24, roughly 70 percent of UW-Whitewater employees had submitted their vaccination records, Chenoweth said. So far 40 percent of students have done the same.
Unvaccinated individuals are required to get tested weekly for the coronavirus. Employees not getting tested will face consequences such as issues with human resources. Students will hear from their dean’s office if they are not getting tested.
“You can’t participate on campus until getting tested,” Chenoweth said. “There is a process like any other policy we have on campus.”
Enrollment has continuously been an issue that the university deals with in recent years, however, this academic year shows signs of some positive trends.
“Our goal for 2021 was to bring freshmen first-time cohorts of 1,825 students. I can tell you that as of this morning we are outperforming that. We’re more in the 1,850 range. We anticipate a few more in the next couple of days,” said Chenoweth.
The first-time cohort increase was credited to employee recruitment efforts. However, the enrollment of the entire student population has still decreased this year due to factors such as fewer transfer students.
Enrollment directly affects the financial issues that the university has had, which were driven primarily by federal funds, Chenoweth said. But the university also saved more money than it anticipated last year.
“We finished this last year with higher cash balances, significantly higher cash balances, than we expected,” said Chenoweth.
Enrollment will help fill in the remaining “financial picture.” Chenoweth expressed that he does not believe a structural deficit will have to be addressed this year and that the university will not see any budget cuts.
“I feel very happy to be here and join all of you and to work with the new Provost as we move forward,” Interim Chancellor Jim Henderson said.