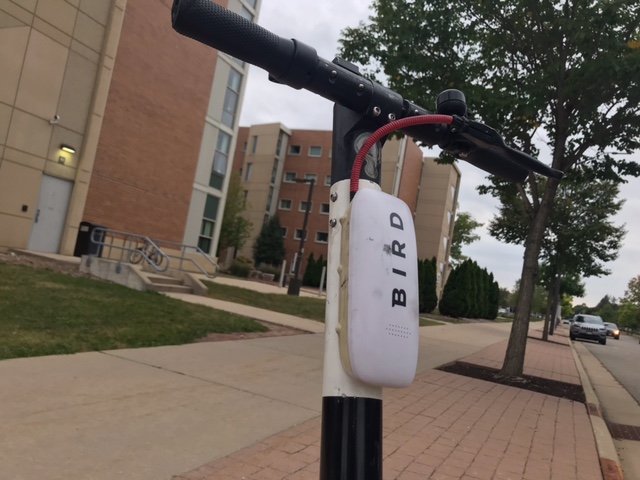 It’s not every day that something new and exciting finds itself riding into Whitewater. But ever since it did, electric scooters are now popping up all over camps.

The city of Whitewater partnered up with electric scooter company Bird for a one-year pilot-program contract at no cost to the city. These zipping two-wheeled vehicles reach speeds of up to 15 mph and have a weight capacity of 220 pounds. Within their first few weeks of being introduced to the city, a number of students at UW-Whitewater could be seen hitching a ride around the city. Birds have been popping up all over the country – most famously in places like L.A and Chicago. Now they are heading our way to smaller populations such as Whitewater to offer the city a new way of transportation.

“Bird works with dozens of universities around the country to offer our eco-friendly transportation. We’re excited to offer our service to UW-W students to provide an alternative to their gas-powered vehicles,” said Bird spokesman Ben Bolton. “Since our launch we have seen impressive ridership in the city, and we are invested in continuing to grow our service in Whitewater.”

The company behind these scooters has a few rules that are required to ride. Some of these include, being 18 or older, parking at designated parking locations when on campus (these can be found in the app), no riding on the sidewalk, and following the general rules of the road. These don’t seem to be a problem for students, however, who have been eagerly trying out the new scooters since their arrival.

The best part about them is you feel like you’re going fast, and it almost feels risky at times, which is something I enjoyed. If I am desperate to get to class on time or I am thinking ‘man, I don’t want to walk’ I may take a ride on the scooters. More than likely I’ll ride whenever my friends want to do it,” said Koy Peerenbom, a senior who is double majoring in business management and marketing sales. “When they first came out me and my friend were desperately looking for them as they were not everywhere right away. We left from my apartment by Simon Suits and then basically went all the way down to downtown Whitewater and back. It took us about ten minutes and cost us five or six dollars.”

There are special rules when it comes to riding on campus that are not shared with the rest of Whitewater. On campus the students have more restrictions on where they can ride the scooters compared to the other parts of the city. UW-W Sustainability Director Wes Enterline oversaw the geo-mapping for campus due to his extensive knowledge of the landscape. It is important to remember that safety is the number one objective when riding the scooters. To ensure that they will be a continued feature on campus, students need to follow rules strictly while navigating through the streets.

“These scooters can be beneficial to help reduce the amount of vehicle traffic, however, I think it could be detrimental if individuals do not park their scooters properly. If they start getting in the way of wheelchairs, access to buildings or laying across sidewalks – that’s where we are really going to see a lot of issues,” said Enterline. “We do not want these vehicles to be a burden and I have seen some scooters around Whitewater where they were on sidewalks and it would be troublesome for our students who use wheelchairs and can’t navigate off the sidewalk. We really want to make sure that this is not happening. I believe if they are used efficiently and parked properly then they will make a great addition to the campus.”

The scooters aren’t only convenient and fun, but potentially eco-friendly. Choosing an electric scooter ride over a car ride can reduce carbon dioxide emissions. Every scooter on the road results in about 1,500 pounds of avoided carbon emissions each year, according to the company. The scooters are now in over 300 cities around the world.

And although these Bird scooters may need to fly south for the winter in a few months, it is expected that they will be returned to us once again after the season begins to thaw. It is suggested that they will be with us until around Thanksgiving and then be out of commission until around spring break. However, it really depends on the decision Bird makes in the future regarding the curious nature of Wisconsin’s weather patterns and when exactly the scooters will fly off to somewhere warmer.

To get more information about the Bird electric scooters and how to use them download their app or go to: https://www.bird.co/cities/