Warhawks power through the finish line 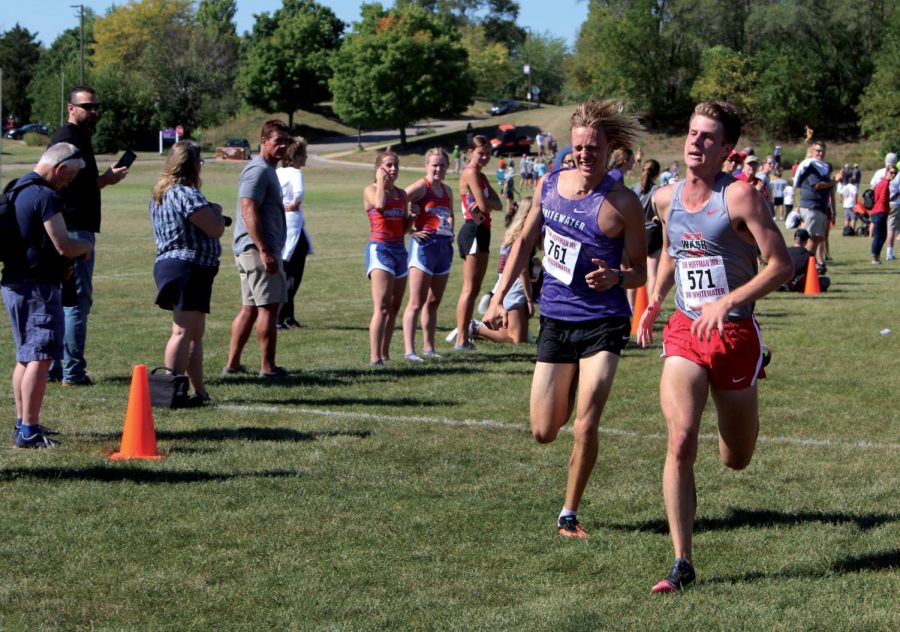 Whitewaters Freshman Chris Allen battles out a Washington U. competitor in the race to the finish line of the Tom Hoffman Invitational in Whitewater on Sept. 18, 2021.

It’s a big day for the University of Wisconsin-Whitewater’s Men’s cross country team since they won another big meet this weekend. The team competed in the Tom Hoffman Invitational on Sept. 18, which also happened to be the teams senior day/parents day. The team ended the meet 1st of 13.

The UWW’s Men’s cross country team competed in a total of two meets this season so far and have pulled a win for each meet. They have been training hard on and off the field every day so that they would end up with these results. The team left the invitational with big smiles on their faces knowing that their training and hard work is paying off in great ways.

“The team has been training really well. There’s been really good groups of people working together throughout all paces of the team. Everyone has someone to run with which makes the grind of some of those harder workouts easier. Just have to continue practicing hard and gear up for the big meets in Oct. and Nov.,” said Sophomore Justin Krause.

The athletes ran a 8000 m run today and the team did amazing. They competed against 13 other teams, but still managed to get first place overall and even managed to run pretty good times this early on in the season. Ready on the starting line waiting for the “go”, the Warhawks were prepared to run fast and their best. The athletes waited for that signal and the minute they got it they took off.

“The meet went to plan. Everyone went with the race plan which is getting out with out groups that we’ve been training with and in the second half of the race pushing the pace and get as close to Washing University as possible. We were able to do that and beat them and they are fifth in the nation and they run the exact same way and we were able to beat them at their own game,” said Senior Kyle Neuroth.

David Fassbender, senior, took one for the team and came in first overall. He ran a time of 25:30.4 which is only about a minute short of his personal record. He held a pace of 5:08 throughout the entire race. Coming in only three seconds short for first place, freshman Gunner Schlender came in second with a finishing time of 25:33 and held a pace of 5:08 for the entire race.

“I felt the meet went amazing. We have a strong team and our goal was just to race smart because this course is our home. The team ran well and I’m extremely proud of all of these men I get to run with every day,” said Freshman Christian Patzka.

“I believe that I did exactly what I wanted which was to stay with the number four and five runners on Washington Universities team and I was able to do that to help the team win the meet. This is the best team I have ever been apart of and that I have led. Our chemistry is what puts us above other teams and we are a brotherhood that is willing tp run through a brick wall for each other…we understand that everyone matters,” said Neuroth.

The team gave it their all today and many of the Warhawks ran within a second of their personal best. This is big for the Warhawks considering this invitational was only their second meet of the season. With this grind and determination, the Warhawks have hope that if they keep this up they will start to run personal bests later on in the season. The next time fans will get to watch these runners run will be on Oct. 1 for their Blugold Invitational meet. Go Warhawks!