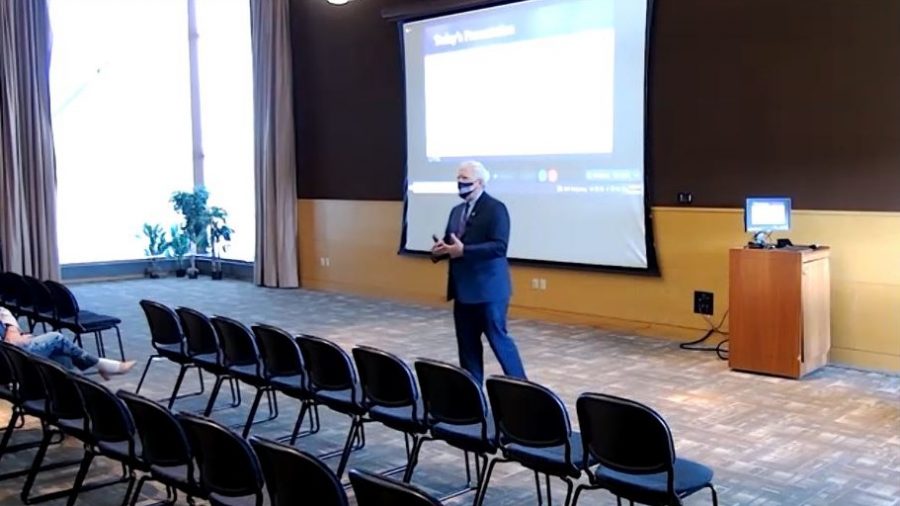 UW-Whitewater’s budget, as explained by Interim Chancellor Jim Henderson, outlined the financial picture the institution currently finds itself in and projections of where the university is headed in the near future.

The university’s financial struggles were caused by the cancellation of housing contracts, the decline in retention rate, and lower enrollment, all of which were impacted by COVID-19.

Expenses for this year are expected to exceed revenue leaving the university with a $4.5 million deficit.

Some of the income is dedicated and restricted to specific aspects of the university such as $7 million toward auxiliaries and $24 million reserved for programs.

“What we’ve got is around $31 million of unrestricted cash, and then as I mentioned, there is a subsequent federal allocation because of COVID that we should be able to claim this year that will give us this total amount of cash,” said Henderson.

The $31 million is planned to be used to cover the current deficit and a $1 million investment toward student employment and faculty travel. $11 million will be set aside for future deficits.

“We’re running a deficit this year. We’re expected we will be running some deficits in the future, and the point here is we want to set aside this cash so we can get our house in order and get our budget so that it’s balanced and give us the time to do that because what I am committed to is we’re not going to have these fire drills of a mid-year, trying to cut programs or cut costs,” said Henderson.

Last year, budget cuts were a polarizing issue. During the question and answer period, an attendee asked:

“You mentioned not making any cuts this year with the process and the segregated fees. Are we looking to utilize some of the funds to support those departments then as well?”

Henderson reassured that as long as the university operates to the budget that was approved for that unit, there should be no reason for cuts. If the unit goes off and expends a lot more than what they were budgeted to have, then the narrative changes.

A tuition reserve of $8 million is also being considered.

“We’re just saying, set this aside as a tuition reserve so that if for some reason our enrollments take a dive, we don’t have to go in mid-year again and don’t have program cuts,” said Henderson. “So this is the plan that we’ve got at this point for our unrestricted cash.  Looking long term, trying to be careful so we can weather whatever comes up.”

Those $8 million would also be reserved in case of unexpected expenses.

Enrollment continues to see a decrease year after year, an issue that all of UW-System schools are experiencing with the exception of Madison, Henderson said. This year enrollment numbers are 3% lower than last year.

“What are we going to do to make sure that the students who have come here have a good experience and come back? Because last year was awful for everyone. It is not surprising that you would see the sophomore numbers decline because first-year students have not experienced the campus life of being on campus and for a lot of them it just wasn’t what they had expected,” said Henderson. “And so this is something that’s happening quite a bit. So we’ve got that number that our enrollments are down some from last year.  That impacts the budget and what we’re looking at.”

Projection models were shown in relation to the presented budget.

Enrollment is projected to increase after this year. However, there are factors that can alter the projected outcomes such as the decrease in high school graduation rates among Wisconsin students. Of those who are graduating, only 29% of them are going to UW schools. This percentage dropped from 33% in previous years.

Modeling revenues were explained to be dependent on tuition and work with alumni. A deficit model was also reviewed. It included assumptions about increased tuition, inflation, and pay plans to make better and clearer conclusions of where the deficit will be in 2026.

“Thank you for being partners in this budget journey as we try to do the best we can with the resources we have and plan on how we’re going to leverage the cash that we have to ensure that we have a financially secure university moving into the future,” said Henderson.