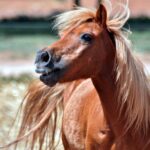 Memories are strange things at times because you never know what triggers recollections from the aging gray matter.

It’s been years — decades, really — since I thought of the times on the farm when we had a few equines mixed in with the bovines and a particular Shetland pony named Cinnamon.

It was a recent warm spell that likely triggered the memory. I was walking the dog at night, and I could feel the thermal temperature waves going from cool to warm as we headed down the road. Suddenly, I was taken back 45 years.

Oct. 1, 1976, was unusually warm for a fall day — in fact, it was downright hot. The high that day was 92 degrees, which is still a record for that date and is the second-hottest October day in La Crosse weather records.

Dad borrowed his father’s pickup and a horse trailer and our destination was a farm near Cashton. A family friend was selling his Shetland pony — which was cart-trained — and we were buying it.

Memory does not recall why exactly we were buying a pony — I don’t remember asking for one. Perhaps it was a favor to his friend. Or perhaps my folks thought we’d enjoy having a pony.

I know that I was excited and was already planning fun outings with the pony as we drove home in the dark with the truck windows rolled down and the warm air blowing across my face. It was a glorious night.

The farm already had two Palomino horses that belonged to my late great uncle and another Shetland pony. Every so often, Dad would saddle up the horses and we would also ride the pony.

But Cinnamon offered more fun, as she came with a cart. When the cousins came over, we’d hitch up the pony and ride up and down the road.

According to Horse & Hound of the UK, Shetlands come from the Scottish island off the northeast coast with the same name, where they have existed for more than 2,000 years. The breed came from a cross with stock brought by Norse settlers and the Celtic pony.

The breed is known for its hardiness, as Shetland winters are long and harsh, and for its toughness. Many Shetland ponies were used in mainland Britain to haul coal carts from the pits. Shetlands can haul twice their weight and are small enough to fit through the tunnels. They can live to be 30 years old, but the ones used in coal mining had short lives.

Shetlands can also be a wee bit stubborn, as Horse & Hound explains: “They are generally brave and good-tempered, although they have a reputation for being opinionated and intelligent — sometimes more intelligent than their owners, which can make them a challenging first pony.”

I was 12 years old when my cousin Brad — who had a horse — came over for a ride. I saddled up Cinnamon, and we rode through the woods.

We reached a clearing and Cinnamon suddenly bolted. I held on and tried to pull in the reins, but the pony was having none of that. I lost my grip and tumbled off into some brush while Cinnamon ran away.

She didn’t go far. Apparently, she spotted an apple tree because that’s where she stopped, munching away on the treats. I was not injured, but realized that the pony had her own priorities and I needed to be a bit more careful when riding.

I stopped riding Cinnamon regularly as I became busier with more chores and other activities. I became more interested in cars than in equines. Cinnamon was pastured with the other horses and pony. She was found dead one day, apparently the victim of a lightning strike.

I was sad that Cinnamon was gone, but I don’t remember crying. Dad sold the other horses and pony soon after.

The era of the horse on the Hardie farm was over. My great-grandfather used horses to clear the land and break sod before getting his first tractor and my great uncle enjoyed them as well.

There was a brief time in the middle 1990s when there was another horse on the farm when my daughter charmed her grandfather into buying one — about the same time she convinced us that we should get a dog.

That’s another story for another time.