Back on the beat 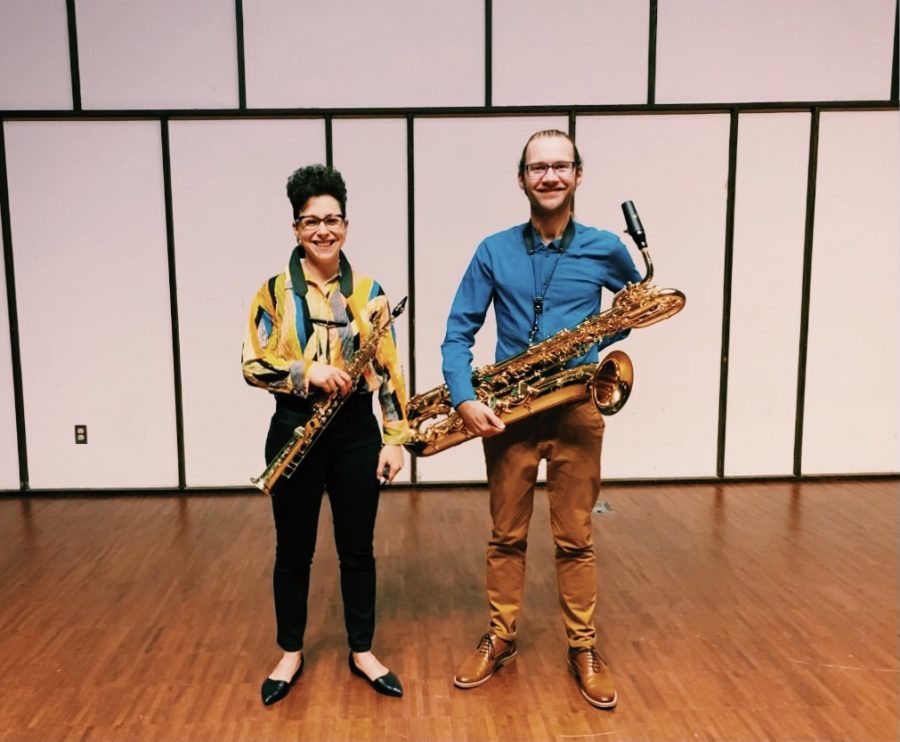 Noa Even and Phil Pierick, a saxophone ensemble, performed for the public on Tuesday, Sept. 28 at 7:30 p.m. at Light Recital Hall.

Noa Even and Phil Pierick, the professional saxophonists who make up the world-renowned ensemble, “Ogni Suono” performed live at Light Recital Hall on Tuesday, Sept. 29 at 7:30 p.m. Even and Pierick formed the inspirational duo in 2010 and would have celebrated their tenth anniversary back in 2020 with a live audience had it not been for the pandemic. Luckily, they are back to performing around the world and the University of Wisconsin-Whitewater was their first stop.

The show on Tuesday was their first opportunity to celebrate their decade long success, and that is certainly what they did. The night was filled with powerful pieces that truly left interpretation up to the audience. Their creative freedom left everyone speechless as they displayed a plethora of feelings through various forms of artistic expression. Bouncing from an ominous tone in the song titled, Chroma by Chris Fisher-Lochhead to forcing the audience to face the vulnerable topic of sexual assault by performing BIG Talk by Shelley Washington, the audience felt the effect of an emotional whirlwind and was seemingly delivered into what seemed like a new space than when everyone first entered the auditorium at the beginning of the evening.

“When I perform I go to a different place. It’s a different kind of focus where I have to shut the audience out but remember to be present,” said Pierick.

This unexpected transformation into a new state was solidified at the end of the concert as they debuted their most profound song, “/tele/path” which was written by Emily Koh in honor of Ogni Suono’s anniversary. Featuring strong body language towards each other, the duo was playing musical catch in front of the audience as they built a pattern of small runs ending in a staccato, then motioning it was time for the other to continue. It was fascinating to witness and attested to the fact that their bond is unbreakable, even from a distance.

“Even though you are apart, it’s about coming together even when you can’t be with each other,” said Even.