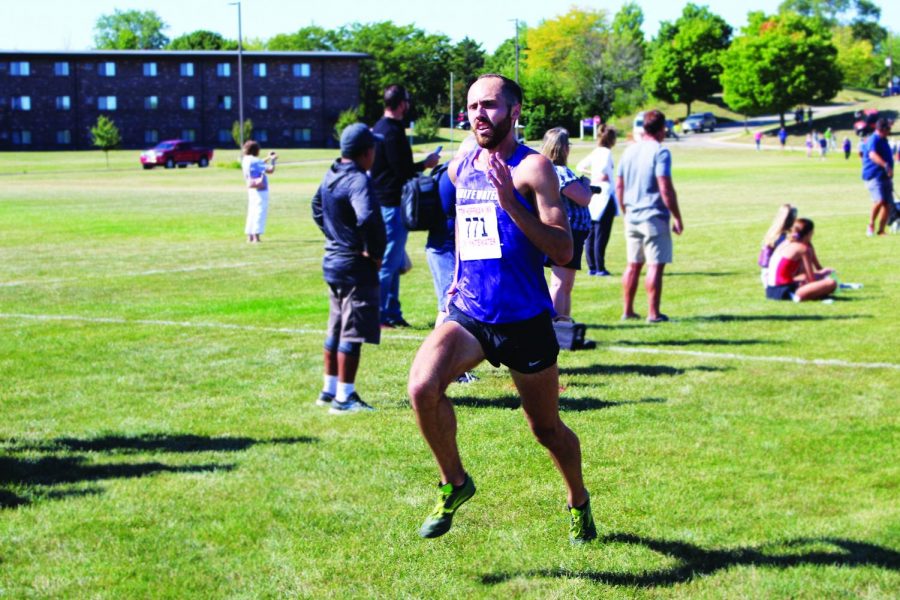 Senior Kyle Neuroth pushes toward the finish line of the Tom Hoffman Invitational meet in Whitewater, WI on Sept. 18th, 2021.

One shocking fact about Kyle Neuroth is that cross-country wasn’t even his main sport when he was young. In fact, he wouldn’t even be at UW-Whitewater had he not been cut from his high school baseball team. The senior runner has found plenty of success at UW-W.

“I was decent at cross country and track through my junior year until I was cut. So I decided ‘Hey, I might as well throw everything into running now.’  And it took off from there,” said senior Kyle Neuroth.

From astonishing personal records in five-and-ten-kilometer races, along with a top 10 record two-mile time at Muskego (WI) High School, Neuroth’s cross country career has blossomed since missing the baseball team.

“I would say it comes from constantly coming to work every day. ‘Mills’ (coach Jeffrey Miller) gives us the workouts and gives us the times, so in terms of intensity, we hit everything he has us doing. It’s definitely what makes us faster. We have team lifts on Mondays and Wednesdays. That’s really all the stuff I do,” said Neuroth.

Neuroth has been running at UW-Whitewater all four years he’s been a student here. He’s ran numerous races and competed in numerous big meets, but there was one specific race that took his career to the collegiate level.

“I always think of my race for high school in the two-mile. I was sitting in like third or fourth place, and the top three got a medal. My shoe comes untied and I end up taking fourth, right behind the third-place guy. I grab my shoe and I throw it (out of anger). I go pick it up and Coach Miller is standing right next to my dad,” said Neuroth.

At this race there were two schools recruiting him and they were UW-Whitewater and UW-Oshkosh, but Neuroth knew that UW-Whitewater would be his home and the best place for him to continue his career.

While winning a national championship is one thing, Neuroth also emphasized the importance of winning the Conference Championships beating their cross-state rival, the University of Wisconsin – La Crosse.

“It’s a very big goal that we’ve never done before. They’re the closest team in our conference to us, and in all five years that I’ve been here, they’ve won the conference title. So, it would be nice to finally beat them,” said Neuroth.

The next time fans will get to see this star out there on the field will be on Oct. 8 against Carthage.