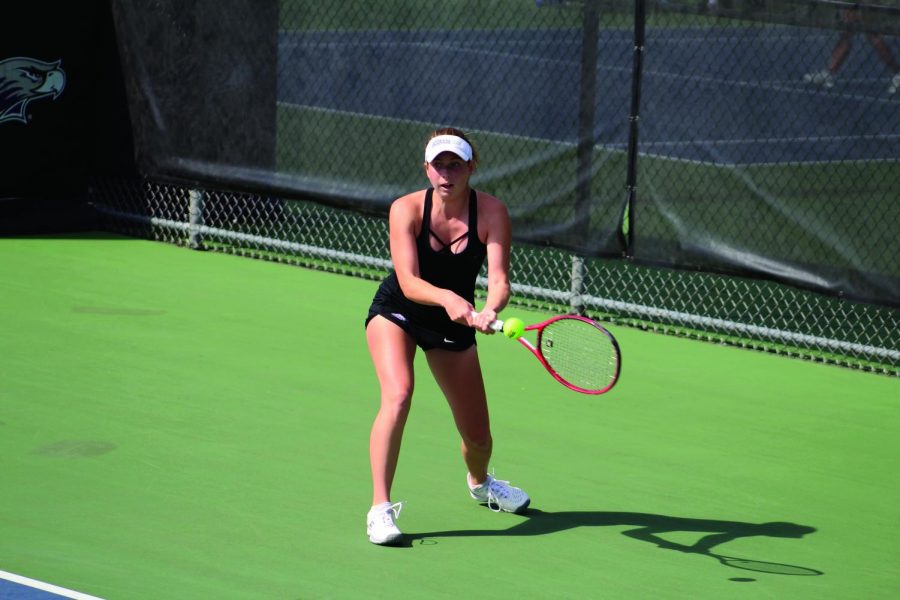 Freshman Cassie Lee looks to gain a point during her second round of the Intercollegiate Tennis Association Midwest Regionals held at the Warhawk Outdoor Tennis Complex on Saturday, Sept. 25, 2021.

It’s been a busy season for UW-Whitewater’s Women’s Tennis team. From competing in a handful of tournaments to maintaining a winning streak of eight to having a quick turn over and competing in the ITA Midwest Regional Championships recently. The team competed in their ITA Midwest Regional Championships. Not only did they do better than they hoped, the team left the tournament with two freshmen taking the All-American titles.

The Women’s Tennis team got their heads in the game and knew what they were getting themselves into. Competing against 230 athletes and 27 other teams didn’t in the least intimidate the Warhawks. In fact, they had the upper hand, competing on their home courts. The Warhawks managed to pull multiple wins in their singles and doubles matches and they couldn’t be more proud of themselves for how they played during the championships.

“Some of these teams don’t have a fall season and I think that made a big difference for us. We’ve been competing and training really hard since Aug. 20 having two-a-days and conditioning at the end of the summer. They got in really good shape and we’ve been competing in some tournaments leading up to this so I think all of that kind of combines for us to be peaking at the right time,” said Head Coach of the Women’s Tennis Team Frank Barnes.

Freshman Autumn Bruno and Cassie Lee played smart during their doubles match. With their unphased mode and game faces on, they won their doubles and left the championships with All-American titles. On top of that, Bruno competed against the number one seed in the singles competition who hasn’t been beaten in years, but Bruno grinded it out and beat her, winning her singles match.

“I think the team competed really well on the court and we came out of the tournament with two All-American freshman….We have six seniors who are graduating this year, including me, and it will be sad for us to leave, but we have some really good freshman who will continue our winning tradition,” said senior Olivia Kraft.

Junior Courtney Day and senior Molly Rueth competed in the doubles matches as well. They had some rigorous competition, but pulled through upsetting the third seed. Senior Olivia Kraft competed in the doubles match with sophomore Kellie Ha and they had some obstacles  to overcome during their play. However, they tore down those obstacles and pulled a win in the consolation bracket.

“I think our team as a whole did a great job. We had a lot of great matches that we pulled a win at. After this weekend I’m excited for the results for the future and we also have one of the strongest teams we’ve had since I’ve been on the team and I’m excited to see what’s to come,” said senior Molly Rueth.

All of these athletes trained hard and prepared themselves for a long three day tournament. Each and every day they grew stronger and more confident in themselves to compete to the best of their ability. After this exciting tournament the Warhawks are more than ready to see what the rest of the season has in store for them. The next time fans will get to see this talented team compete will be on Oct. 5 against UW-Stevens Point. Go Warhawks!