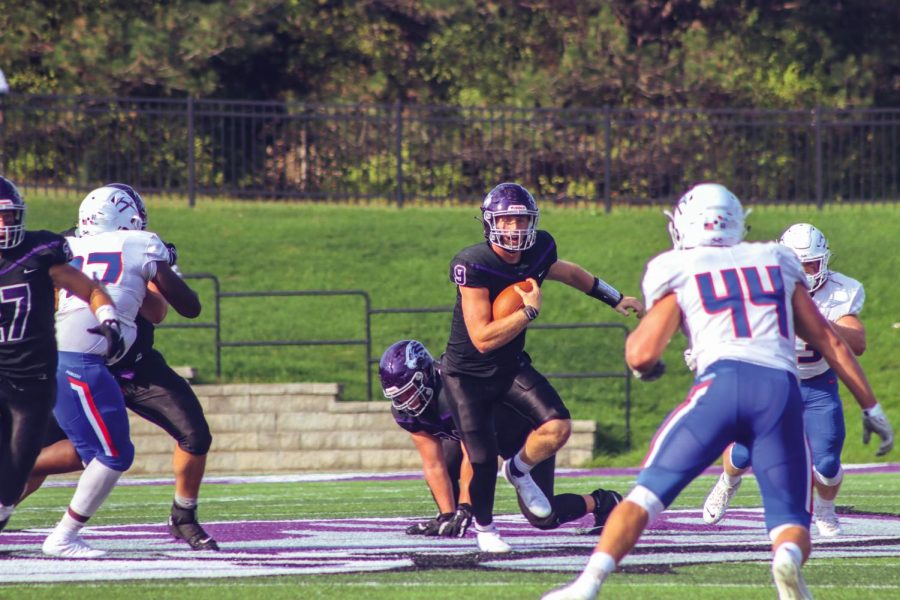 Freshman (quarterback) Jackson Chryst (9) runs across the Perkins Stadium field to score during the game against University of Wisconsin Platteville, Saturday, Oct. 9, 2021.

Meylor threw for 214 yards and had four touchdown passes on 22 completions, including 30-yard and 14-yard touchdown passes to senior wide receiver Ryan Wisniewski. Meylor also contributed in the run game as well, rushing for 33 yards and a touchdown.

“I had a lot of time, the offensive line was awesome,” Meylor said, who attributed much of his success to other positions on the offense Saturday. “We’ve got some great receivers that know how to get open for me.”

When asked about his preparation for Saturday’s game, he said he reminds himself to “play slow.”

“When I get things sped up in my head, everything gets too fast. You’ve got to slow it down and process the defense and exploit what they’re giving us,” Wisniewski said.

The senior wideout now has six receiving touchdowns to go along with 357 receiving yards this season, averaging 17.85 yards per catch and 89.25 yards per game.

Head coach Kevin Bullis shared his praise for the offense following the game, stating that the offense’s timing on routes and receiving patterns ultimately gave Whitewater the edge in the game. “It’s all a timing thing. It’s really a timing thing on those routes and the timing of those patterns,” Bullis said.

When asked about Max Meylor, Bullis said that he is impressed by how much he’s grown at the position since the team’s last full season in 2019. While Meylor continues to flourish on the field, Bullis stated that his success

“The beautiful part is seeing his efficiency in the first four games. Usually that’s something that evolves and continues to improve, and it is continuing to improve, but he’s been functioning at a high efficiency since the beginning of the season,” Bullis said. “For Max to be able to function at the efficiency that he is, it wouldn’t be happening if it wasn’t for what our wide receivers are doing and what the offensive line is doing. They give him the opportunity to go out there and do it.”

This coming Saturday, the Warhawks will be on the road facing the UW-Oshkosh Titans. The game will be in Oshkosh and will start at 1 p.m. UW-O is 3-1 this season, most recently falling to the UW-La Crosse Eagles on Saturday by a score of 30-21.