Bringing jazz back to life 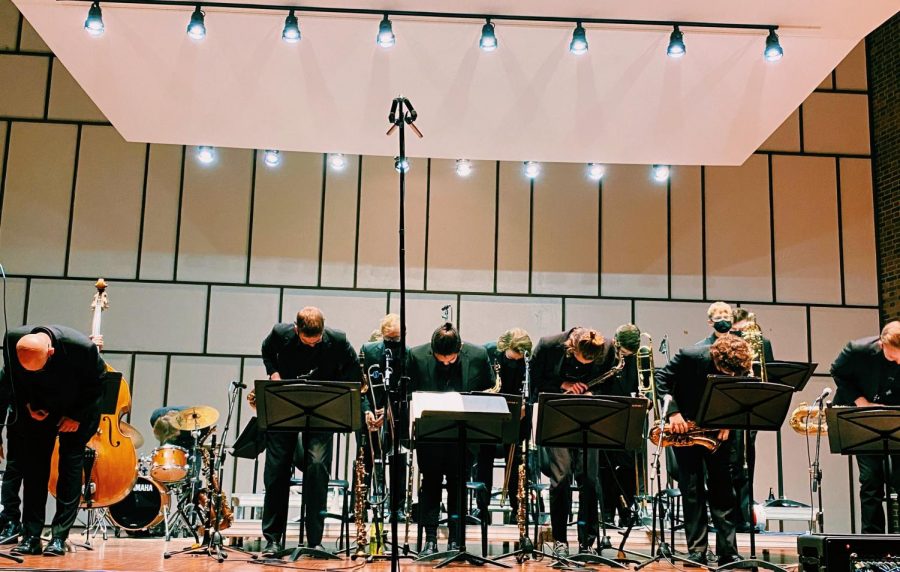 Jazz One Ensemble pictured taking a bow at the end of their concert on Oct. 14 at 7:30 p.m.

The pandemic may have stopped live music for a beat, but on Oct. 14 at 7:30 p.m. the UW-Whitewater Jazz One Ensemble and world famous guest artist Robert Hurst showed the audience that jazz is alive and well. Presented with a timeless and classy sound, the only word to adequately describe the outcome of the night is, success. They reminded everyone what it means to go out for a night and truly enjoy music – not simply to listen, but to be engrossed.

The ensemble is jam packed with an array of talented multi-instrument playing musicians; however, one in particular stood out, playing an instrument which brought a taste of sass to the group’s sound. Senior  flutist, Enrique Chambers, a flute performance major, was the touch of grace that the audience needed to hear in the song entitled, “Shout Me Out” by John Clayton. Playing notes almost too high for the human ear to detect, with poise that left everyone astonished as it appeared effortless. In a similar manner, he was often the climax of the pieces, serving as the finishing touch to each crescendo, performing with a visible passion behind each note.

“I am passionate about all of my instruments because music gives me a place to share what I feel and think without needing to use actual words,” said Chambers.

Passion for music and jazz performance was a common theme throughout each night as  Brandon Terwilliger, Lily Freeman, Alex Fiedler, David Stoler, Aidan Bray, Mckennen Tobin, Quinn Galvin and Kyle Deschner all slayed their solos and proved that they were born to be on stage. Alongside them throughout the night was the talented musician and composer, Robert Hurst, who had been mentoring the groups in the days leading up to the performance. His genius was visibly contagious as the tonality of both Mr. Hurst and the ensemble blended as one seamlessly, showing the audience that his knowledge was a blessing to UW-Whitewater’s music department and the future of the musicians that professors such as Dr. Michael Hackett, the performance’s director, are instructing.

“The beautiful ones have not yet been born, but they obviously have been,” said Hurst in reference to both the title of the album he composed and the student ensemble.