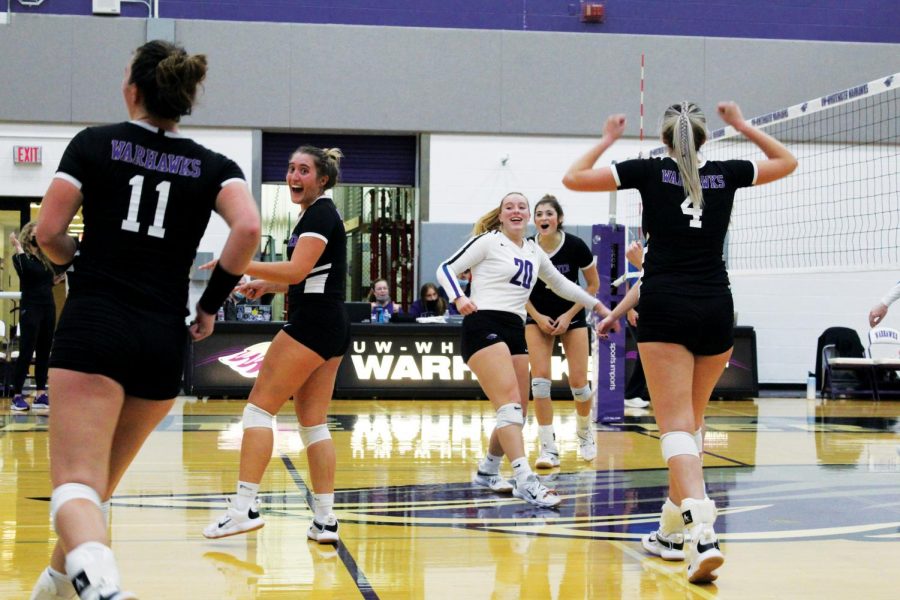 The University of Wisconsin-Whitewater women’s volleyball team defeated the University of Dubuque (IA) in their matchup Wednesday, Oct. 13. The Warhawks won 26-24, 25-16, lost 27-25, then won the match in the final game by a score of 25-22.

Coming into the Wednesday match against Dubuque, the Warhawks had a 18-1 record and were ranked 9th in the latest AVCA Coaches’ Poll. Dubuque was unranked prior to the match.

Game one of the match raised an intense and tight matchup between the two teams. Dubuque took an early 12-7 lead but were forced to take a timeout after UWW scored four straight serves to make the score 12-11.

The rest of the game stayed within one to two points, with the biggest lead after the timeout being a UWW 20-18 lead. The game went into overtime, resulting in a 26-24 win for UWW following a kill by sophomore outside hitter Jenna Weinfurt.

The second game of the match ended in blowout fashion for the Warhawks. Dubuque never had the lead in this contest, losing by nine in the end primarily thanks to nine errors on the Spartans.

In the third game, Dubuque and UWW flipped the lead plenty of times, forcing four timeouts between the two teams. Dubuque would force overtime in this game and would win by a score of 27-25 following two kills from sophomores Emily Swanson and Alexis Bedier.

Weinfurt led the Warhawks with 14 kills and 16 points, while two other Warhawks also had double digit kills; seniors Erin McNeil and Morgan Wardell had 11 and 10 kills, respectively.

Following Wednesday’s win, the Warhawks travelled to Stevens Point this past Saturday, defeating the Pointers 3-0 to improve to 20-1 on the season.

This Wednesday, the team will head to Platteville to take on the Pioneers at 7 p.m.