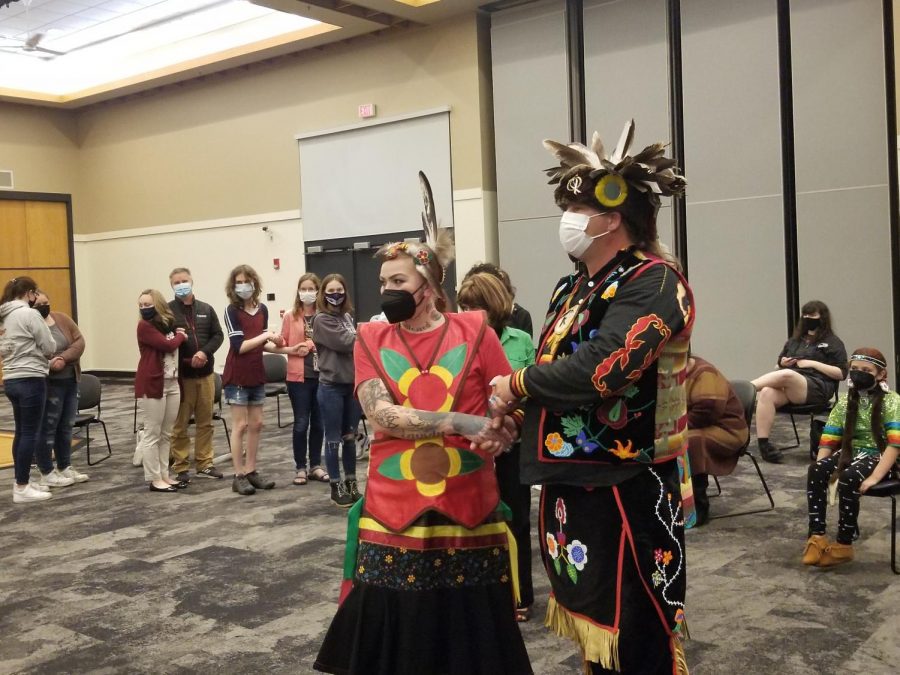 Chanel Wachsmun and her dance partner show guests how to do the “love dance.”

The UW-Whitewater Native American Cultural Awareness Association (NACAA) celebrated the naming of Ma’iingan Hall through song and dance Wednesday, Oct. 13. The event was supported by the Redcliff Singers of the Red Cliff Band of Lake Superior Chippewa who later hosted a drum circle at the University Center. They were accompanied by guest speakers from the Great Lakes Inter-Tribal Council and from the Ho Chunk Nation.

“This is an opportunity for people to find out about different cultures other than their own and just to have a good time and relax,” Said NACAA adviser Martha Stephenson. “The Red Cliff Drum and Dance Troupe tells us a little about different types of dancing and has little demos. But most of the time is an opportunity for students to dance and try out Native American dances that are open to anyone who is open to trying them.”

The potato dance was a unique spectacle of everyone in the room taking a potato and placing it between their forehead and someone else’s. They then had to dance without having the potato fall. If gravity does overtake the potato and it falls, they lose. It was explained that this dance is a type of game that natives enjoy playing at pow wows. The round dance, step-dance and inter tribal dance were all beautiful forms of Native American dance that were demonstrated by native men, women and children. After the demonstrations anyone who wanted to, got to try the dances themselves as the band beated rhythmically on a cow-skin drum.

“This event is to showcase some of our song and dance cultural components to the students here – to sing and share our songs with everybody and have a good time. This is a social event. We did a little demonstration earlier for the naming ceremony and that went really well. This is another added addition that we are doing here to share our songs and dances,” said Vice-Chairman for the Red Cliff Band of Lake Superior Chippewa Nathan Gordon. “Some people are coming to learn for the first time and even dance for the first time. I think having an annual thing like this every year is good, not just here at the Whitewater university campus, but a lot of other universities should really do the same thing – to showcase and infuse a little bit of the culture for their students. In the state of Wisconsin, there are 11 tribes out there – our homelands. I was even talking earlier with some of the faculty that it would be nice if they could do this more than once a year.”

Along with the dancing and singing, the group also spoke on the history of each dance they were performing. At one point a member of the band began to comedically tell Native American jokes that had everyone in the room chuckling over the brazen ones he chose.

“I’m here because I am actually Native myself. I grew up in a Native school from K-5 all the way into eighth grade. It’s called ICS – an Indian Community School. It needs a name change because we are going for Native American, not Indian,” said media art and game development major freshman Juan Flores. “This is my background and what I grew up on. I was a part of the ICS Eagles Singers throughout grade school, so this is something that I am used to and what I know. I am hoping to get in touch with my community once again. I’m Oneida and although this is an Ojibwa Tribe band, I am still here for it. I want to hear and experience more songs for myself since I was a singer.”

There were dozens of students eager to ask the Redcliff Singers a variety of questions regarding their culture, dress and dances. They were all but happy to oblige in giving detailed and descriptive answers to the curious minds of those who asked and were listening.

“I strongly believe in our responsibility to bring awareness to Native culture and Native tradition as white people who are inhabiting native land. This is something that I try to make a part of in my conscious life. I think it’s great that the university offers things like this so students can experience it in an ethical and meaningful way,” said senior creative writing major Katherine Childs. “So far this has been a really interesting and educational event, and I am having fun. I like that they are involving everyone that’s here. We all get to partake in the dances and also engage in asking questions during the Q&A.”

This celebratory ceremony has been long awaited. Ever since the decision to name the new hall after the Ojibwa word for “wolf,” many have been waiting in eagerness to finally celebrate this name change and in doing so recognize Native American culture here on campus.

For more information about the UW-Whitewater Native American Cultural Awareness Association visit the University Center on Thursdays at 5 p.m. in room 268.