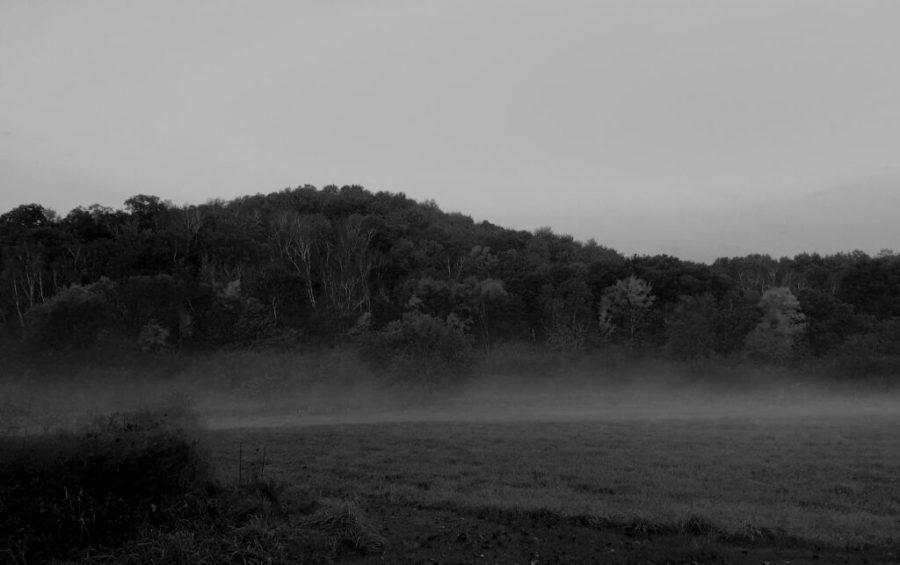 What did 13-year-old Chris Hardie hear while walking through these woods on a late summer evening? (Chris Hardie photo)

Halloween is the season for ghost stories and hauntings, but are there even bigger creatures that go bump in the night?

Many people consider the legendary creature Bigfoot — also called Sasquatch — as a myth in the same category as vampires and werewolves. But 21% of those who participated in a Chapman University survey in 2018 said they believe the creature is real. Others believe that if the apelike creature exists, it is confined to the great forests of the Pacific Northwest.

But there have been sightings and first-hand experiences with Bigfoot in the Upper Midwest too. The Bigfoot Field Researchers Organization (brfo.net), which logs and investigates Bigfoot reports across the country, has compiled 103 reports in Wisconsin, 76 in Iowa and 75 in Minnesota.

One of these reports was from 1976 in Monroe County — which was the talk of the seventh-grade class at Melrose Junior High at the time, let me tell you. A Cashton-area farmer said he spotted the creature in October from about 60 feet away and it gave off a putrid scent. He said that his dog — which approached the creature — was sick and listless for several days.

This was about a year after I saw the film “Legend of Boggy Creek,” a 1972 docudrama horror film about the Fouke Monster, a Bigfoot-type creature seen around Fouke, Ark., that was released in 1975. It was a film that gave me some nightmares but also made me intensely interested in Bigfoot.

I’ve never seen Bigfoot, but late one summer evening not too long after I saw that movie, I was walking through the woods on my way home from my cousins’ and I heard footsteps. It was probably a squirrel or a deer, but I didn’t stick around to investigate. My heart started thumping and I ran home never looking back, sure that a creature was on my heels.

The most recent Bigfoot sighting in my neck of the woods was in 2012 when Vernon County deputies investigated a possible Sasquatch sighting last week near a campsite at the Kickapoo Valley Reserve. A driver reported seeing a dark-haired creature hiding near the ditch.

In 2006, a man reported an encounter he had in 1998 near Whitehall in Trempealeau County. The man was driving along Highway D between Whitehall and Strum and reported seeing a creature that looked like a child covered in hair drop from a tree and run up a ravine.

The man said it took about 30 seconds for the whole thing to happen. “But it is something that is burned into my mind forever,” the man told an investigator. “To this day, I truly know I saw a child Bigfoot.”

Another sighting occurred in 2005 near Hatfield in Jackson County. A man coming home from work at 2 a.m. saw a large dark brown figure about 7 feet tall crossing the road walking upright.

An area near Spring Valley, Minn., in Fillmore County was the location of several encounters.

In 2005, a man was squirrel hunting when he observed two creatures — one black and one brown — run through the brush. The same man witnessed at least three other incidents with his family. He said the first creature was 8 feet tall and was probably about 600 pounds and likely a female with a crest on its head.

The second was also 8 feet tall but larger — 4 feet wide at the shoulders — with flowing dark red hair and a head that was more domed. His impression was that this creature was a male.

He said he followed them nearly to the edge of the swamp and then began to get frightened. He decided that continuing was not wise and left the area.

In 2002, the man’s family was camping when they spotted a large reddish-brown creature about 7 feet tall, and they found large footprints in the creek bed. They also heard high-pitched screams and early the next morning, heard what sounded like something huge and heavy run through their campsite.

The same man in 2001 said he was bow hunting when he parked his truck about an hour before dawn and heard a noise down the trail. He shined his flashlight in that direction and saw two red, glowing eyes about 8 to 9 feet off the ground. The same thing happened another week later when he saw eyes in the same location.

In 2003, the family sold their land to a friend who spotted large footprints 18 inches long and 10 inches wide that went across a cornfield.

“We didn’t know what or how to tell him, but did,” the man told an investigator. “He just stared at us and turned white as a sheet after we told him what we thought these might be from. He had never seen anything like it.”

And the sightings continue. The most recent sighting in Wisconsin was July 18 of this year in Washington County near Richfield when a 16-year-old driving down the highway reported seeing a two-legged large figure covered in fur standing next to a tree along Highway 164. The creature’s eyes were also caught in the headlights.

The teen’s father went back to the site with him about 45 minutes later and brought a dog who would whimper whenever they got close to the location.

Were all of these experiences just figments of the imagination? Did they actually see different animals and confuse them for something else? Or is Bigfoot — as some suggest — a telepathic creature connected to aliens and capable of interdimensional travel?

There is a lack of physical evidence. Lots of grainy photos and video and many sightings, but not a skeleton or a fossil.

But the skeptic who bought the Spring Valley land was convinced after he had first-hand experiences.

“He said he would never in his life have believed any of this had he personally not seen the tracks or heard the vocalizations himself,” said the former landowner. “Another new, reluctant believer.”