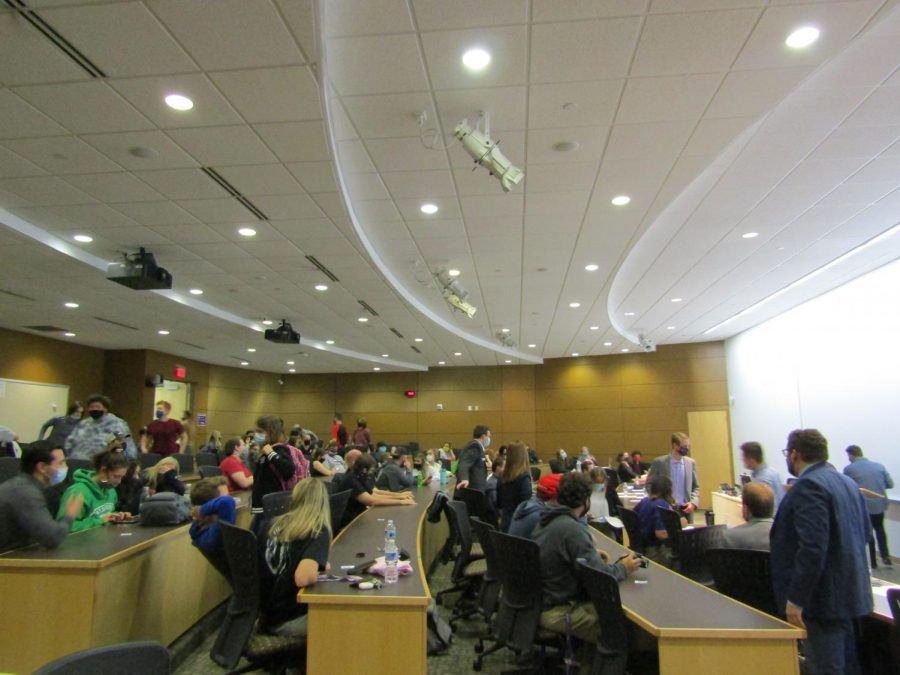 Big crowd at the annual College of Republicans and College of Democrats debate on October 19th, 2021.

The College of Republicans and the College of Democrats held their annual debate on Oct. 19 as they discussed controversial issues prominent in today’s society.

“Over the years we’ve seen political tension rise a lot, not only on campus but in the community and across the country. It’s become harder and harder for us to find common ground,” said Beauchamp. “A lot of our meetings are discussion-based and in this day and age, on college campuses especially, civil discourse is key. I think tonight is really a wonderful example of college students joining together regardless of these ideologies.”

Some of the questions they tackled included:

What role should the U.S play in other country’s affairs, specifically Afghanistan?
How would you describe the U.S. relationship with China and how should we handle the relationship with them in the future?
Should healthcare be a privilege or a right and why?
Is the Texas heartbeat bill a just law?
Should voter IDs be required to vote in all states?
Should marijuana be legalized for recreational use? What about medical use?
How do we fix the workforce shortage?

One of the most controversial discussions during the night was abortion.

The College of Democrats argued that it is a matter of privacy and the Texas Heartbeat Bill is unconstitutional. They also suggested that this law is not fair to women.

“Six weeks of a pregnancy is not very long. Six weeks would be a woman being two weeks late to her period and many women wouldn’t even know that they’re pregnant at the time. Imagine that you’re a woman and you find out that you’re pregnant at seven or eight weeks. Now you can’t even have an abortion,” said Verdecia.

A woman would be stuck bearing a child that she did not plan for and now faces health and issues, he added.

The Republicans responded by saying that abortion is morally incorrect and there are other avenues a woman can take.

“If you ask any medical professional across the board, they will say if you have a heartbeat, you are alive,” said Kukla. “Financially, a child is always going to be a financial burden. There are organizations out there that help you financially.”

The debate ended with a few audience questions and remarks from the participants.

“The Republican party believes in the idea of natural law and in the idea that the government does not institute a right but our rights are given to the people by God. To summarize the republican party platform, we are pro-life, pro-constitution, pro-religion and pro-freedom,” said Wichert.

Deacon shared how satisfied she was with the debate and how “interesting” it was to hear how much the two parties actually agreed on certain issues such as the vaccine mandates being a state issue rather than a federal issue.

“Our party as a whole, and our org, places a lot of importance on social equity for everyone. A lot of our members are allies to or parts of communities like the LGBTQ community, indigenous Americans, religious minorities, so we’re all about making sure everyone has a voice and never tolerating hate,” said Deacon.