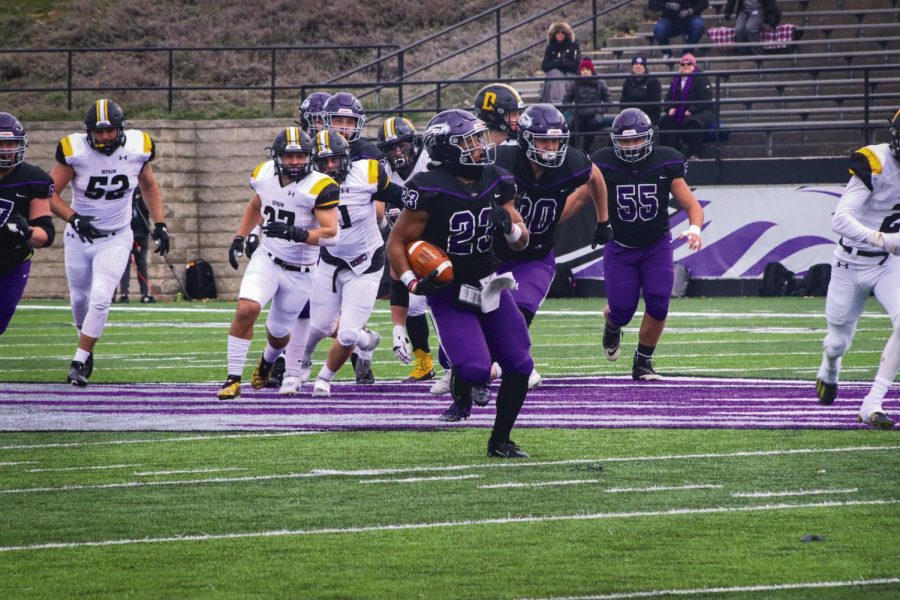 After a 69-7 victory against Greenville (Ill) in the first round of the playoffs, the UW-Whitewater football team kept their momentum going in a 45-0 shutout win against Depauw University out of Indiana on Nov. 27 at Perkins Stadium. In dominating fashion the Warhawks secured their spot in the quarterfinals.

Whitewater, ranked third nationally going into the playoffs, is now one of eight teams remaining in the hunt for the National Championship. By flexing their high powered offense creating 600 total yards, and strong defensive presence forcing Depauw into negative total rushing yards and recording a program record tying nine sacks, the Warhawks brought a comfortable 38-0 lead with them into the locker room at halftime.
After the first half the Whitewater starters had already put up full game numbers and lit up the scoreboard. In one half, quarterback Max Meylor recorded 208 yards and a touchdown through the air, in addition to a rushing touchdown thanks to a helpful push on the goal line from a few members of the offensive line. On the receiving end, Ryan Wisniewski racked up 124 yards and a touchdown in the first half. In a historic performance, running back Alex Peete trotted through the Depauw defense for 157 yards and three touchdowns in the first half, and quickly recorded another 40 yard touchdown in the third quarter before taking a seat and watching the rest of the game. With four rushing touchdowns in the game, Peete tied the Whitewater record putting him on a list with a number of other Warhawk legends.

With such a commanding lead, the Whitewater starters were able to take a seat early in the third quarter giving players like Evan Lewandowski (QB), Jackson Chryst (QB), Tamir Thomas (RB), and Jaylon Edmonson (RB) a chance to hold onto the lead and bring it home. Head Coach Kevin Bullis talked about the importance of these players getting experience in these kinds of games.

“We often talk here about our tradition, the tradition of Warhawk football. One of the traditions is development,” said Bullis. “Probably one of the base elements of our foundation is development of the athlete of the student-athlete. There are practice repetitions which are vital, practice is of the essence, what you see in practice is what you see in games, but in games those reps turn to gold and the opportunities to learn and be under the pressure of a game are invaluable learning lessons. It’s something that we’ve done here for so long, having a lot of players play that if somebody should get injured, it is an easy transition.”

Not only does this give experience to the younger players and back-ups off the bench but it also helps the starters, like Alex Peete, Max Meylor, and Ryan Wisniewski take a seat and stay fresh and healthy for the following weeks as Whitewater ventures deeper into the playoffs. Alex Peete talked about how getting to sit at the end of blow out games has helped him this season.

“It has been vital, honestly,” said Peete. “As far as staying healthy and being able to sit out fourth quarters this season, and being able to watch my brothers go crazy on the field and do their thing as well. Especially Tamir, he is a young dude, a freshman on the field, watching him go, watching Jaylon break off big runs, that is really great to see.”

While the Warhawk bench players did not put up quite as good of numbers as their first string counterparts they were still able to gain experience in a playoff atmosphere and a chance to take the in-game reps mentioned by Bullis. Junior Evan Lewandowski totaled 46 yards through the air, and Jackson Chryst, a freshman quarterback, had 14 passing yards and 14 rushing yards. Behind star running back Alex Peete, junior Jaylon Edmonson had 31 yards on 6 carries, and freshman Tamir Thomas had 51 yards on 5 carries averaging an impressive 10.2 yards per carry.

Whitewater hopes to continue their dominance at home next week, Dec. 4 at noon in a quarterfinal matchup against Central (IA) in what could prove to be their biggest challenge of the season so far.