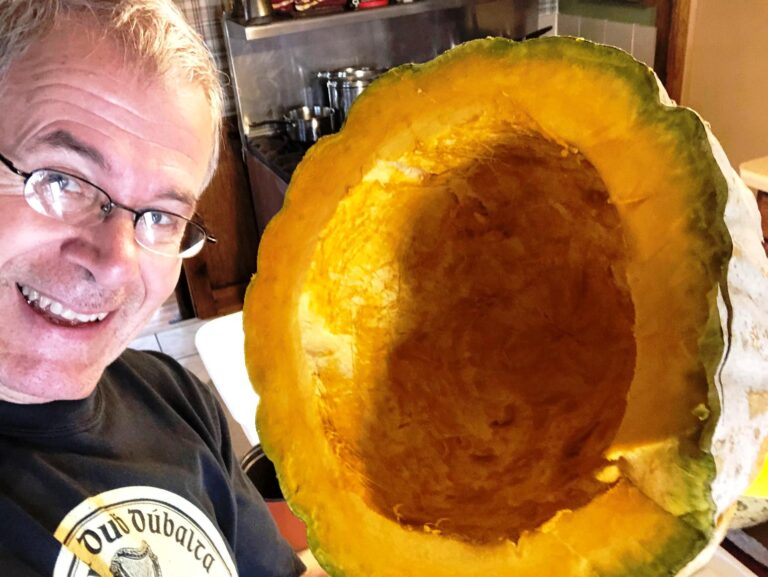 Half of this blue hubbard squash is big enough that Chris Hardie could wear it on his head. (Chris Hardie photo)

The garden harvest season is long over, but we’re still enjoying the bounties. Sort of.

A few weeks ago, I wrote about harvesting our winter squash, including a couple dozen blue hubbard squash. These massive fruits sat in the back of my pickup truck for several weeks before the nights got frosty and I hauled them into the basement for storage.

Having a bunch of gigantic thick-skinned fruits — some of them weighing more than 30 pounds — sitting around the basement to trip over doesn’t bring them any closer to the freezer. So, recently I sliced open three, cleaned out the innards, and my wife Sherry baked them in the oven before mashing them up to go into the freezer.

Just those three squash made about a dozen quart bags. Now I like squash — something I couldn’t boast about when I was a kid — but there’s a limit to incorporating them into our menu, a limit to our freezer space and a limit to the time to cook them.

Can squash be the main entree at holiday dinners?

My own fault blowout

Longtime readers may recall a column where I complained about planned obsolescence and the fact that the tires on my utility cart were flat after only a year.

And the only reason I bought that cart was that it was cheaper to buy a new cart than it was to buy replacement tires.

Yes, they don’t make ’em like they used to and it’s intentional. Because if we make something too superior, we don’t buy new items or upgrade to the latest and greatest phone.

Since I wrote that column, I was able to find a source for tires that are cheaper than buying a new cart. They come mounted on a rim, so it was an easy job to get the cart back in action.

But one must remember that small tires are not like car tires. When they are flat, one must be careful with using high-powered air compressors when airing them up. Because if you exceed the air pressure recommendations — which is not hard to do — the tire can blow out, sounding like a shotgun blast and possibly dangerous if your face is anywhere near the tire.

Lesson learned. And my face is OK.

It’s the small air compressor from now on.

I always love to hear from readers who respond to my columns. With their permission, I share their feedback.

My column on the beauty of the bluffs struck a chord with Janice Redford from Cambridge.

“Hello Chris, I just loved reading your column about the bluffs along the Mississippi and the Trempealeau area.  Once, a long time ago, my husband, Fred, and I were looking for a place to escape and get married, so we chose to drive up the river in October 1961.  We landed in Winona (Minn.), the county seat, got a license and went back up on Nov. 3 to get married.

“As we were poor college students, we felt it was our better choice to elope.  We just celebrated our 60th anniversary and your column reminded me of our first adventure up the big river.”

Congratulations, Janice and Fred, on your milestone.

My column about the reported sightings of Sasquatch in Wisconsin and Minnesota brought a response from Eric Stubb, who lives in Knowlton, near Mosinee, and is originally from Washington state.

Stubb said in the fall of 1974 he had a deer hunting site near Humptulips, Wash., in an area known as the Promised Land, mostly shallow swamps with islands of land connected by old raised logging roads.

Stubb and his hunting partner, Mike, were driving in a Volkswagen Beetle early one morning about 2 a.m. to check out the land. They had about a 20-mile slow drive on an old logging road. The last five miles were on a road overgrown with younger trees and a canopy of older trees overhead, which was like a narrow tree tunnel, Stubb said.

“We were probably the first ones in 40 years to go out that way except for my scouting trips,” Stubb said.

It was about 3:30 a.m. and Stubb said he saw movement through the trees to the left. It was a creature.

“I braked,” Stubb said. “The creature stepped onto the road right in front of my car. It was apparently as surprised as we were because it reflexively put its arms out onto the bonnet/hood of my car to stop the vehicle.

“It was about 8 feet tall, hairy with black eyes. We stared at each other for what seemed several minutes but probably mere seconds. Then the creature stood and moved through the trees to my right into the swamp and disappeared.”

Stubb said he and Mike sat there for several minutes in stunned silence before talking about seeing a Sasquatch. He said the fur was matted with sticks, moss, pine needles and leaves.

“I must state that our Sasquatch was never threatening, just surprised like we were. It looked intelligent and peacefully left us. I hope others will treat the species with respect and kindness.”

The Humptulips area is the location of many reported Sasquatch sightings. Stubb said he never reported it because he had no evidence — just what he saw.

“The encounter is still kind of burned in my memory, and I still swear to what I saw as gospel truth,” Stubbs said. “Mine was not a quick glimpse through trees or at distance. It was close up and a very persuasive reality.”