Parade of Lights returns to Whitewater 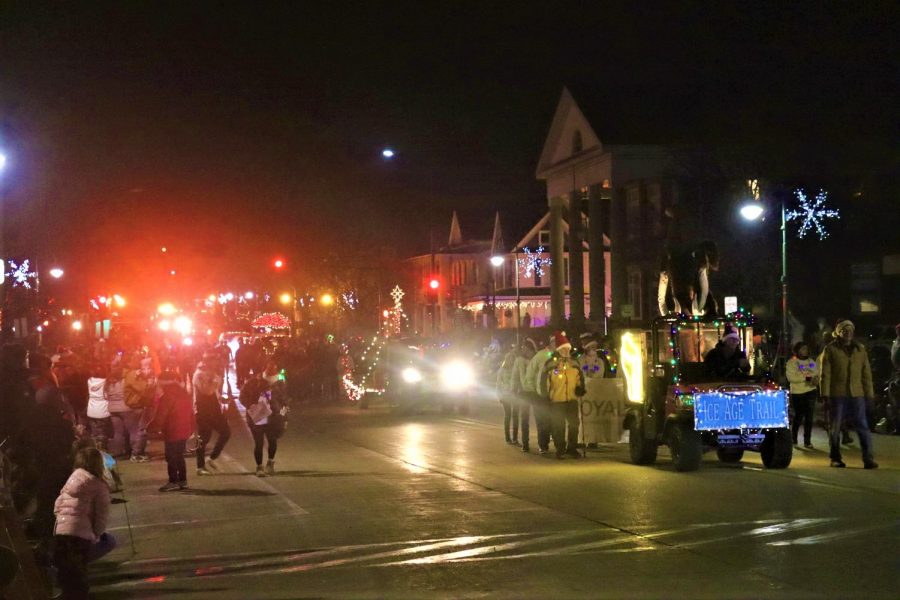 Whitewater in December is a wonderful time of the year for many citizens and visitors alike. One of the best ways they celebrate the joyous holiday season is coming to see the Parade of Lights. The Parade of Lights has been an annual tradition for Whitewater, but last year  the event was sadly canceled due to Covid-19. However, this year the Parade of Lights is back spreading joy, cheer with the help of floats, a sea of sparkling lights, and enthusiastic people waving and greeting the many attendees, filling them with the spirit of the season. The Parade of Lights took place on Dec. 3 at 6 p.m. in downtown Whitewater. The Whitewater Chamber of Commerce, sponsor Generac and many organizations and volunteers all showed up to spread the special spirit through the parade.

Many other events also took place during the day before the Parade of Lights, all of which brought many smiles to the faces of community members and families. People making memories with Santa Claus, eating smores, and having a fun time.

“Before the parade, particularly for families with children, First Citizen State Bank on Main Street had Santa from 4 to 6 p.m. Then at 5 p.m. we had some things that were actually out on the street. They give folks a chance to wonder if they want to shop,” said Board Chair of Downtown Whitewater Lisa Dawsey.

According to Dawsey, the Parks and Recreation Department decorated the tree on Main Street. People were invited to pick up an ornament, and put something positive on it to reflect on 2021 and think of something positive and put it on the ornament which will go up on Dec. 6 and stay up through the holiday season. They also had s’mores and hot cocoa at a little spot by their office at 150 West Main St. from 5 to 6 p.m. The Book Teller on Main Street had a story time for kids. Also from 5 to 6 p.m. two other spots that are normally storefronts were making arts and crafts with an educational twist on it. It’s aim was at a  younger audience to encourage them to think about science and maybe even just some counting. Revamp Nutrition also was doing a healthy hot chocolate and talking about their business on center street. After the parade, there was a free chili dinner at Living Word Fellowship who also had a children show and some cookie decorating.

Generac, the sponsor of the parade,  is a large manufacturing company factory in town that decided to give back to the community by sponsoring the Parade of Lights. Sponsoring for the Parade of Lights gives more chances of the event to happen with many lights, events, and people to enjoy the holidays more.

There were many volunteers from the community that were families, citizens, organizers, and also people who just wanted to be a part of the event to spread cheer to the community.

“Our volunteers in our town wanted to spread cheer and are proud to be representing in the parade,” said the production supervisor of Whitewater Kristy Westenberg.

Citizens, families, children, and students who went to see the parade to have a break from the hardships in the world, to see the pride in their community, and see the joy of people with the happiness in Christmas joy that is coming.

“I thought it was very well done. It brought out the Christmas spirit because the people that were a part of the parade were cheerful and wished everyone a Merry Christmas,” said sophomore psychology major Lilly Hansen.

The Parade of Lights brought the community together in honor of the Christmas spirit, taking a break from the everyday life struggles. Many floats from organizations, local businesses, Ice Age Trail Alliance with their giant Mammoth, and Santa Claus made children smile, and brought wonder and awe to the community. It’s truly the most wonderful time of year in Whitewater.