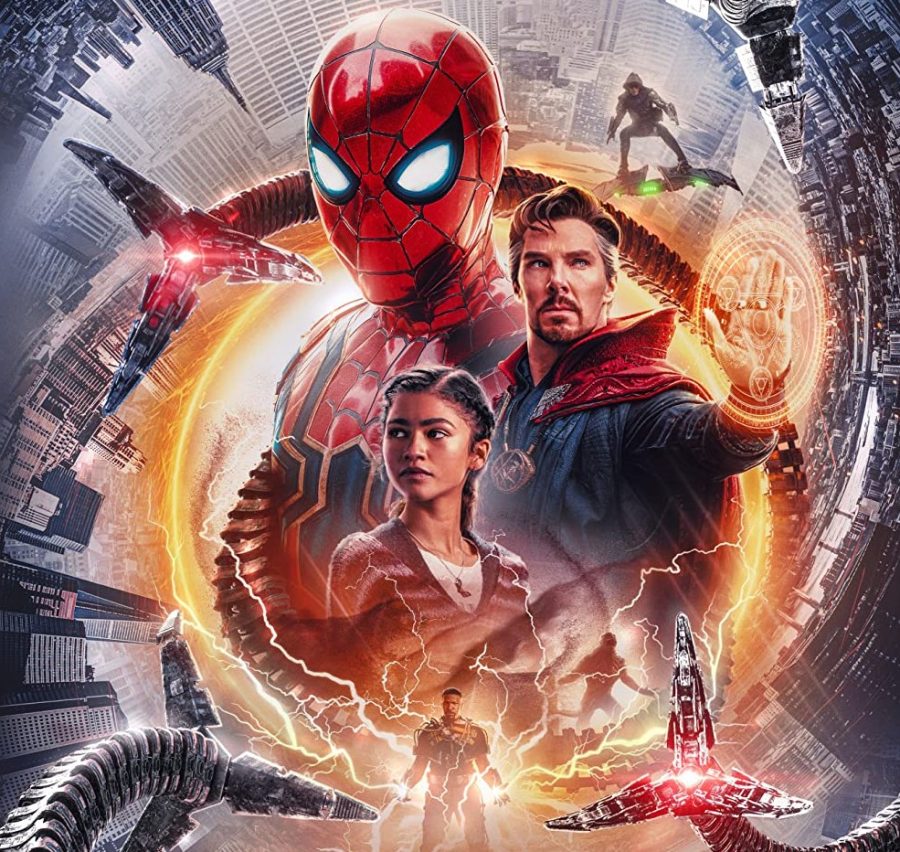 Here comes Spider-Man swinging in to save the movie theaters, the world, and the multiverse! Spider-Man: No Way Home, the third film to a trilogy of Marvel’s Spider-Man movies with something that has never been done in the Spider-Man films with different action scenes, new showcase of the theme of what it is like to be a superhero, the multiverse, usage of nostalgia, and more moments of the movie theater experience. Spider-Man No Way Home takes place directly after the Spider-Man Far From Home with the villain Mysterio revealing Spider-Man’s identity, changing Peter Parker’s life with so many people supporting, people hating him, and losing his chances of a somewhat normal life. Peter no longer has the high stakes of being a superhero due to his identity being revealed, and goes to Doctor Strange for help to change events so that people forget he is Spider-Man. However, while trying to correct the past, Dr. Strange’s actions accidentally cause villains from other realities to come to their universe. This creates higher stakes for the sake of the multiverse, and would force Peter to come to his senses on what it means to be Spider-Man.

Jon Watts is back as director, and is the first filmmaker at Marvel Studios to direct an entire superhero trilogy. The returning cast members are Tom Holland as Peter Parker, Zendaya as MJ, Jacob Batalon as Ned, Marisa Tomei as Aunt May, Tony Revorli as Flash Thomspon, and Jon Favreu as Happy Hogan. Actors from other marvel movies who made appearances were Benedict Cumberbatch as Doctor Strange, Benedict Wong as Wong, Willem Dafoe as Green Goblin, Alfred Molina as Doc Ock, and Jamie Foxx as Electro. Lastly, there was Thomas Hayden as Sandman, Rhys Ifans as the Lizard, and JK Simmons as J Jonah Jameson. This film is one of Marvel’s biggest films since Avengers Endgame and plays on the nostalgia of fans who grew up with the earliest Spider-Man films.

Tom Holland shines with his role as Peter Parker as he discerns what it really means to be Spider-Man. Holland gives one of his best performances of his career so far through his expression of the sad-side of Spider-Man’s humanity. This is shown throughout the film with Peter and his loved ones, and fighting with Willem Dafoe’s character the Green Goblin and contemplating the last words of his Uncle Ben “With great powers comes great responsibility.” The film brings the most action-packed scene out of the Spider-Man films with a lot of punches,  swings, and villains creating suspense to put you up on your feet with sweat coming down your face. Willem Dafoe as Green Goblin, everytime he screams, laughs or fights it makes you feel a shiver down your spine. One of the best visual effects in the film from Spider-Man is the swinging, seeing the city, the Mirrorverse from Doctor Strange magic, and the final battle was full of beautiful visuals from the trilogy. The best thing about the film is the experience of seeing it in the theater. Whenever there was an appearance of a villain from the past films orsome character reveals, you would end up seeing people screaming, shouting things out loud and clapping. The film will definitely be a cinema experience that audiences will remember for years to come.

You can still swing by a local theater to see Spider-Man No Way Home. Be ready to laugh, cry, cheer, and you will have a webtastic fun time at the theater.