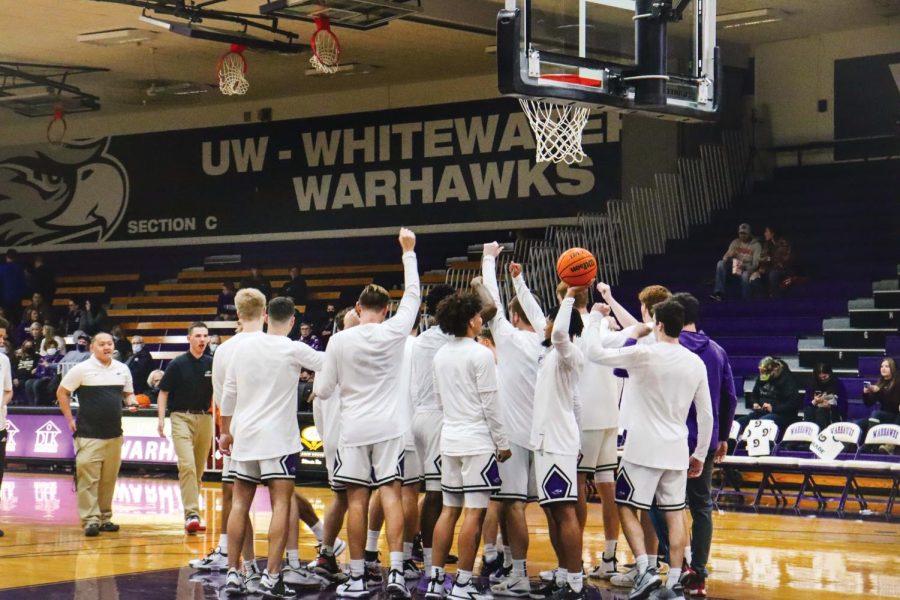 The Warhawks Men’s basketball team huddles and cheers together before the game against the University of Whitworth Saturday, Nov. 13. 2021.

Wednesday, Jan. 12 the men’s basketball game between the UW-Whitewater Warhawks (11-5 overall, 4-1 WIAC) and the No. 2 UW-Platteville Pioneers (16-0 overall, 5-0 WIAC) was cancelled due to an outbreak of COVID-19 in the Warhawk locker room. This virus took several team members out of commission including Head Coach Pat Miller and at least eight other positive test results between players, coaches and managers in the last week.

In an all too familiar narrative, students, faculty, athletes, coaches and countless others around the globe are once again facing the repercussions of the ever spreading COVID-19 virus that is stronger than ever, with its new Omicron variant. Its latest victim is the Warhawk men’s basketball program. The protocol for a positive test is that any unvaccinated player that was a close contact has to sit out five days.

On Monday a slight change was made to that rule, stating that only athletes who received their first two initial vaccine shots and also the booster would be considered vaccinated. This rule change played a crucial role in Wednesday’s cancellation, because although most of the team is vaccinated, few have received their booster so far.

After a week with two big conference wins against No. 6 UW-Oshkosh and UW-Eau Claire, Whitewater had strong momentum going just to be stopped in their tracks right before a big matchup against a Platteville team ranked second in all of Division III.

“It is disappointing. We had a great week last week and we had good momentum going,” head coach Pat Miller said. “Platteville is obviously one of the best teams in the country and having the opportunity to play them at home was huge for us so it is disappointing.”

It is likely that this game will be made up eventually by the end of the season, but conference rules state that a make up game of a postponement will not count as a conference win or loss on your record. Rules like this are important to consider and be aware of, especially as COVID-19 continues to spread and impact everyone.

“It is going to impact everyone. This is a reality that we are going to have to live with, the new variant is impacting everybody, whether they are vaccinated or unvaccinated, it is just extremely contagious,” Miller said. “There is only so much we can do to prevent the spread and it appears when it gets to a team it rips through. It is unfortunate, but it is something that we have to deal with and manage. Hopefully the fact that we have some depth will help us.”

Possibly one of the biggest struggles for any sports team during the pandemic is coming back from an unplanned cancellation and for coaches being able to keep their players sharp, focused, and enthusiastic about the upcoming games that may or may not happen.

“The reality of the situation is that last year we dealt with a far more abnormal season than this. So I think our players are used to this and they have some resiliency. This is a tough situation, I think everyone is doing the best they can. They are trying to make the best decisions they can for the health and safety of everyone,” Miller said. “It is hard because it is an ever changing landscape. When games started for us in November, Omicron was not even on the table; it was something that came along in December and changed the landscape. Everyone is working as hard as they can, they are trying to be flexible, we are all trying to follow the rules as best as we can and that is just the current landscape.”

It is true that COVID-19 is ever changing and also unpredictable. Time will only tell the obstacles thrown into the remainder of the Division III hoops season, as the virus only seems to get worse everyday.

Despite the spread of the virus throughout the team, the Warhawks did play their Saturday game at UW-River Falls. The Warhawks, who are receiving votes in the D3hoops Top 25, fell to the Falcons 60-76.