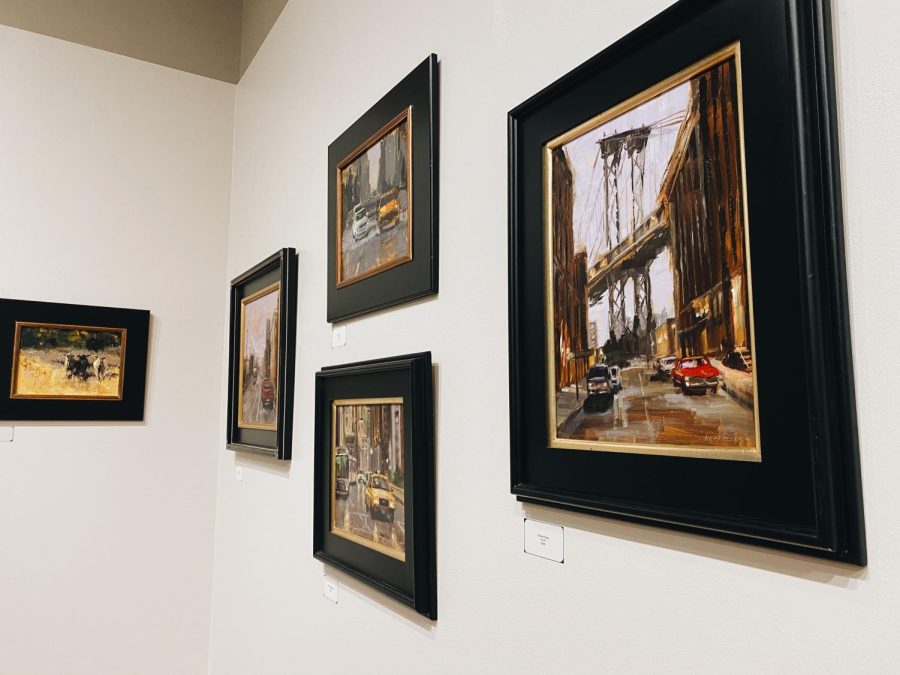 Pictured on the far right is “Guardian Bridge,” an impactful piece from Palecek’s exhibit.

Well known artist, DK Palecek, has just opened a brand new exhibit entitled, “Inevitable Juxtapositions.” Palecek, who is from Northeastern Wisconsin depicts intricate cityscapes and beautiful urban landscapes throughout her work, displaying her abundance of talent for all to see.

Eye catching pieces such as, “Contemplation of Elegance,” leave the audience feeling as if their soul has been exposed and seen. Palecek’s ability to interpret the emotions which can stem from a singular moment in time is indescribable and can be defined as nothing less than brilliant.

“What intrigues me most is the symbolism woven in the human brain that allows one simple stroke to suggest an intricate object or a complicated scene. I will never tire of the thrill of that phenomenon,” said Palecek.

While her pieces can draw a certain level of sentiment out of viewers, they are also extremely relatable. One piece in particular that will certainly strike a chord with midwesterners is entitled, “What Lies Ahead.” The composition exposes the reality of heavy traffic in winter months, complete with snow covered cars and slick roads.

“Compared to the peace and serenity which is shown in pieces like, “Guardian Bridge,“”What Lies Ahead” is a truthful description of a midwestern city in the morning. It is very chaotic, which offers the audience a truthful demonstration of the beauty of everyday life,” said UW-Whitewater student Baylie Hansen.

The collection is open to the public from Jan. 19- Feb. 24 at Roberta’s Art Gallery in the James R. Connor University Center.